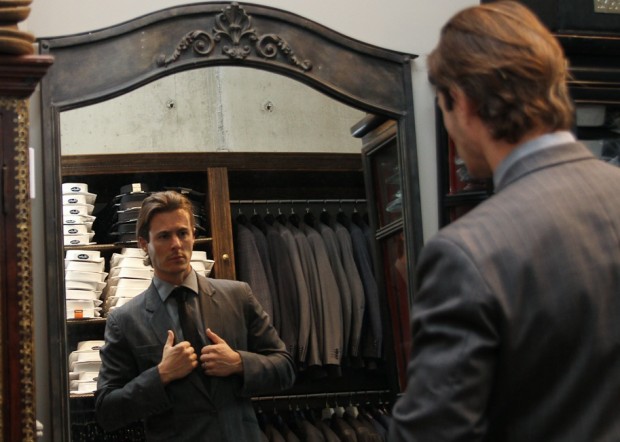 Trained in Milan at legendary Istituto Marangoni, Toronto-based Christopher Bates is an intrepid designer achieving a meteoric rise in the fashion industry. His eponymous menswear line is gaining traction with retailers, consumers, media, stylists, and celebrities. Bates was featured as one of the top six leading menswear designers in Canada (Sharp Magazine, September 2009). Since launching he has been selling in leading Canadian boutiques including Toronto’s high-profile Gotstyle Menswear (voted #1 Menswear Store in Canada, Sharp Magazine 2012). Bates’ ultimate goal is to create a leading international designer fashion brand.

My ideal first date would be:  dinner and drinks

I’m not bragging but: I am the best

A talent that may surprise you: I’m a great cook

On weekends you’ll find me: with friends

What I put on my burger: Roquefort cheese

I was most impressed on a date when she: played soccer with me in the park

In high school I was: wild

My guilty indulgence is:  chips

In my past life I was: an explorer

In my next life I’ll be: a superhero

If my life were a genre of movie it would be: action adventure

The actor that should play my life story is: Christian Bale

To relieve stress I: work out

If I played hooky I’d: party

If I found a genie in a bottle my three wishes would be: a trillion dollars, super powers, immortality

Want to suggest or even be one of “Toronto’s Most Eligible Bachelors”? Email menandwomen@eligibleinc.com with your suggestion.