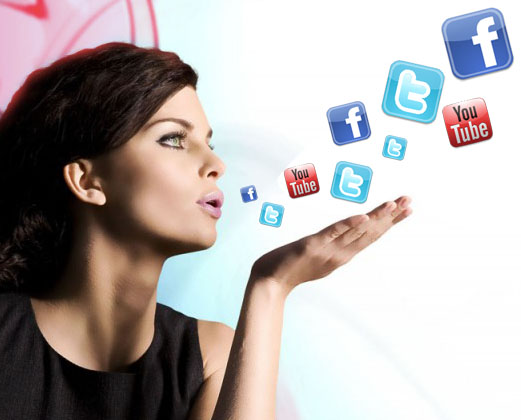 More than ever, we’re connecting with businesses, friends and family online, especially through social media. As a social media strategist (my credits include CTV Olympics, McClung’s Magazine, various public relations companies and of course,DivaGirl), I’m constantly being asked how to use these networks affectively.

This will be a three-part series about my must-have social media platforms, broken down with some tips about how to share information effectively and professionally.

First off, no, you don’t need to be on every single network. However, to build your presence online, you need to use your social media platforms consistently.

Never fear, with these tips and tricks in this series will help you become a social media Diva!

Twitter is a miniature blogging platform, where messages are called tweets. Each tweet is only 140 characters, and you can attach photo, video and web links to each message. With over 500 million registered users on Twitter, it’s a must-have network for every individual and business.

Tweet Length – With only 140 characters per tweet, be clear and concise with your thoughts on Twitter. If you are posting information about an event, promotion, et cetera, my recommendation is to only use 120 of these characters (don’t worry, there’s a counter which keeps track of characters). This makes it easy for people to retweet your tweet with your username, putting the focus back on you.

Retweets -this is abbreviated at RT. When you are going to forward on someone’s tweet, it’s social etiquette to put “RT @username” before posting it.

@ – You can use the “@” to message others. It will appear as @username (no space between @ and the username). However, your @username tweets will not appear in your public timeline unless you put a period before the @.

Ex: @DivaGirlFitness Very excited for the DivaGirl Dance Jam May 25!
This will not appear in your public feed.

Ex: .@DivaGirlFitness Amazing, I’ll see you there! I’m so excited for @kateknoxdance’s contemporary dance class #divagirldancejam
See the period before the “@” sign? This will tweet will appear in your public feed.

Direct Message – also called a DM. This is a private message between you and another Twitter user, and only you two can see the 140 character tweets sent between each other.

However, don’t think you can just start DM-ing Kim Kardashian on Twitter. You both have be following each other to communicate through direct messages.

Hashtag (AKA #) – Think of a hashtag as a keyword. You can use it the search bar on Twitter to find trending topics, people, et cetera.

For example, if you were looking for fitness classes in downtown Toronto, you can search using hashtags: #downtown #Toronto #gym #fitness #dance

Many events that hashtags. For example, above in the “@” section, I used the hashtag #divagirldancejam. Anyone who searches or clicks on this hashtag will find all tweets containing #divagirldancejam and can see the links, photos and Twitter profiles of those talking about the hashtag.

The easiest tactic is to tweet once per day. Whether it’s promoting your business, a link to an interesting article or photo of the beautiful weather, each tweet build helps shape and create your online personality.

Early afternoon is when most people are working at a computer and online to click through to more links. Most retweets will happen around 4-7PM, so don’t worry if you’re tweet isn’t shared right after you post it.

Think of this like prime time television – when people are on Twitter in the evening, they are looking for entertainment. Traffic is generally slower in evenings, unless there is a major event happening.

Let’s keep it simple – check your spelling, try not to use any bad four-letter words and never, ever tweet something to someone what you would not be comfortable saying to their face.

Stay tuned for part two of this social media series – coming up, I’ll be posting more about how to use my next social media must-have, Instagram.

Portia Favro is a social media strategist, broadcast journalist, host and award-winning dancer/choreographer. She has worked as the Co-Lead of the social media team for CTV Olympics for the London 2012 Games, Social Media Director of McClung’s Magazine, Social Media Coordinator for DivaGirl Inc. and regularly coaches clients in social media strategy. Portia has also worked in front and behind the camera with CTV’s national morning show, Canada AM, Global Okanagan, The Ryersonian and written for many other media outlets. When she’s not writing, you’ll find Portia in the dance studio either teaching, choreographing or rehearsing with DivaGirl Entertainment, The Army of Sass and on her own projects.