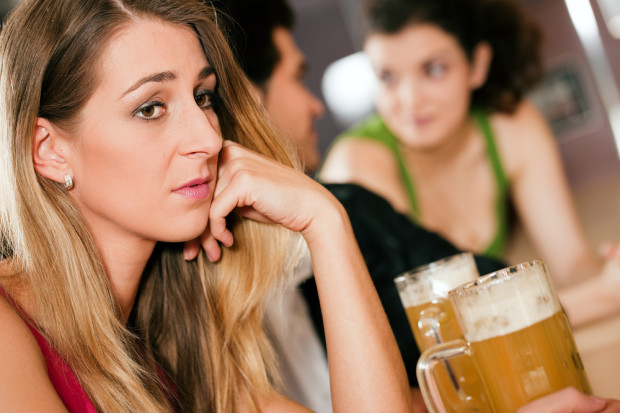 Do you ever wonder why you or your friends are still single? Have you gone on what you thought were great first , second, and even third dates and yet you still haven’t found that special someone? Maybe you’re dating a couple of people simultaneously but when it comes down to it you’re still feeling alone. If a relationship is your goal and you’re doing plenty of dating, there’s probably one main reason why you’re single. Can you guess what that reason is? Don’t worry I’ll tell you: you have too many options. Yes, you read that correctly. You might be wondering how that’s even possible. Let me explain.

A wise woman once said, “don’t put all of your eggs in one bastard.” Regarding the early stages of dating I completely agree with her. There can be something fulfilling about exploring your options, learning what works for you in a relationship and what gets on your last nerve. Take your time. Enjoy dating. I highly recommend it. Get out there and have some free meals! Experience some super awkward first dates and enjoy some surprisingly good ones. You deserve it. Just know that when you’re ready for something of substance it’s time to slow down and focus on quality versus quantity. People can tell when you’re half-assing a relationship with them. When you’re constantly dating multiple people the people you are dating will know that you are not fully investing in them. Why would anyone want to fully invest in the next step with you when you’re only giving them a sample? Sometimes you just can’t do two things at once; no matter how well you think you can juggle.

Have you ever been to a theme park and tried to ride two rides at the same time? Hell no you haven’t because a.) that would be crazy and b.) you probably wouldn’t be alive to read this right now if you had actually succeeded. Do you know why you can’t ride two rides at once? Besides the fact that there are probably two different height requirements, you can’t ride two rides simultaneously because each ride is different. They each are intended for different age groups, they have different levels of risk, and they are all going at very different speeds. The same can be said for dating and serious relationships. They both have their pro’s and con’s but they provide different experiences. Dating is like taking a ride on the Tea Cups at Disney World. It’s fun, exciting at first, and a great introduction to the potentially more exciting rides in your future. With that said, no one goes on the Tea Cups looking for the same thrill they get from the Magic Mountain ride. Why? Because they are on two completely different levels! A serious relationship is like Magic Mountain, there is a higher risk but it can yield a greater reward.

Personally I wish someone had explained this to me sooner. If they had I probably wouldn’t have had so many free meals but I also wouldn’t have half-ass invested in so many relationships and all together would have saved myself some heartache. It literally took a force of nature to make it clear to me.

I was visiting my family in Kansas City for the holidays but I already had my return flight booked back to New York. My trip was going to be a short one because I had a meeting in New York that Friday that I just couldn’t miss. The weather was nearly perfect all week but when Thursday came around things took a turn for the worst. A huge snowstorm came and forced hundreds of cancellations across every major airline. That important meeting I had on Friday? Yeah, it was looking like I wasn’t going to make it. I called into the airline to see if there were any other flights I could take. The only option they gave me was to book a new flight for the following day. Like mouse searching for cheese, I began to look over every airline sight for the first/best flight out of Kansas City. Within the first five minutes of my search I found a great flight. Not only was it non-stop but I’d get into the city at a reasonable hour. The flight was great but it wasn’t perfect. I felt I could do better. I kept searching every other airline. I even called a few (that’s when you know I was desperate). Finally, after spending the better part of a day finding flights from Kansas City to New York I decided that the flight I had originally bookmarked earlier in the day was just the flight I needed. With a smile on my face and a little peace of mind I went back to that original site to book the flight. Unfortunately, that flight was no longer available. “What?! You’re kidding right?”, I thought to myself. That flight was just what I needed. It wasn’t perfect but it was perfect for me. By taking my time and juggling my options, I missed out on what I really wanted. Then it hit me. The same can be said for our relationships. No partner is ever going to be perfect. If you keep juggling your options and holding out for that “perfect” person you’re going to miss the great person that’s just right for you. By the time you realize that they are the one you want, they will be gone. Someone else who saw their value from the very beginning will gladly take them off the market. Is that what you want?

The next time you go out and see a couple hotties at the restaurant or bar remember this: you’re single because you have too many options. Don’t be greedy. Pick one. Have as many pairs of shoes as you want. Enjoy as many sports teams as you want but when it comes to lovers try making a choice. Who knows it might just turn out to be even better than Magic Mountain, and perhaps one of the best decisions you’ll ever make in your life.

Devyn Simone is a Kansas City native who believes nothing is impossible as long as you’re wearing the right heels and lip gloss. Devyn became an official movie critic for a top radio station, the host of a weekly teen radio talk show, and crowned Miss American Teen all before the age of 17. She made her silver screen debut in 2006 as the outspoken pageant coach on MTV’s Tiara Girls. While studying at the University of South Florida, Devyn was cast as a housemate on MTV’s The Real World: Brooklyn. Devyn’s love life began to spark debates, online polls, and audience response worldwide. Since her time on The Real World, Devyn Simone has been featured in numerous television projects including multiple seasons of MTV’s hit show: The Challenge. Devyn latest television project will premiere in spring 2014. She is currently working on her first book, which will give insight into her adventurous (and often amusing) love life. In the meantime, Devyn connects to her fans with weekly dating tips on her blog www.devynondating.com.