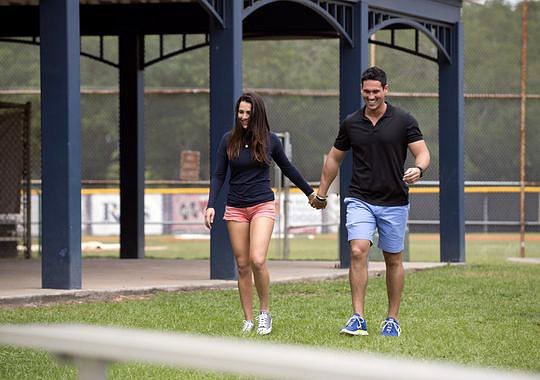 The Bachelorette: Bring Her Back Home… And Don’t Let Her Leave

Welcome back to The Bachelorette, ladies and gentlemen. But more importantly, welcome to the four cities of Andi’s four potentials, where we await the most important episode of the season (besides the final rose). Welcome to The Bachelorette episode: “My son is better than your son, and here’s why.” Bring on the mothers…

First stop is Milwaukee, where we meet too many Nick replicas for my taste on a Monday evening. But it’s nothing that one too many scarves, and micro-brew samples called “Nick & Andi” can’t fix!

Poor Nick is just too nervous to talk to Andi himself, so he has to get his little sister Bella to compile a list of written down questions. Because what’s cuter than having your little sister act as your spy? I see a relationship of trust awaits the cute couple.

Bella starts with a simple question that typically would require an equally simple answer: “What do you like most about my brother?” Good thing Andi really knows how to connect with little kids, as she begins to ramble on about mental connections and the relationship between physical and mental, and something about Nick “understanding” her. Yes because this child understands you perfectly, Andi.

Next we head to Chris’s hometown Arlington, Iowa, the city of plaid shirts and chic plush vests. It’s not hard to guess how Andi is feeling today, considering the amount of times she has to admit “Chris is like the epitome of a man when he’s driving that tractor.” So, let me get this straight. You ain’t really a man unless you drive a tractor? Got it.

Chris declares his love for Andi across the Arlington skyline with an airplane banner, and then takes Andi to meet the family so they can reassure her that she would be marrying not just any poor laidback farmer, but a successful “businessman” farmer. And just to emphasize that they say “a phenomenally successful” farmer, that is. Something tells me they think very highly of Andi….

Goodbye Farmer, and hello Tampa. It’s time for some batting practice and a whole lot of NFL talks. Will Andi be able to sacrifice her Sundays cuddling with Josh to watch weekly football? Tune in as we watch Andi battle it out in her mind whether (or not) she could give up knowing that not everything revolves around Andi. Tough decision.

The last date is in Dallas with Marcus, where the two lovebirds enjoy a romantic evening, where Marcus reenacts their first group date- at a strip club. Well, at least Andi likes it, but I can’t help but wonder if Marcus needs to reassure Andi that he is “hawt ya’ll” so that maybe her feelings can catch up to his. Poor Marcus.

Back at the house, Chris Harrison breaks the tragic news of Eric Hill’s death to the group. With the unfortunate news, the episode continues as Andi is still requested to make a decision. Marcus is sent home admitting he “believed in something that wasn’t there.”

Don’t worry Marcus; there are a ton of girls out there waiting for you.