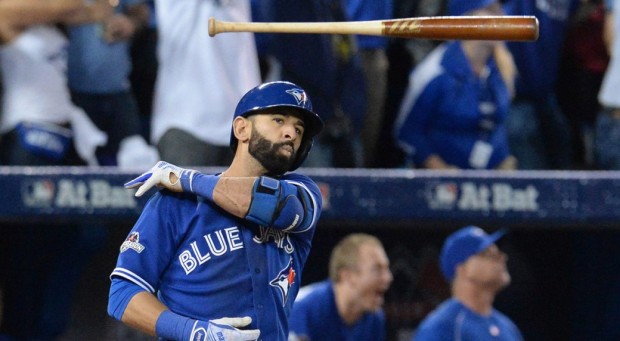 What The Bautista Bat Flip Meant To Toronto – And To You

Where were you when it happened?  I was jumping up and down like a lunatic in the boardroom.  My colleagues broke the damn table and put 2 dents in the wall.  The horns were going ballistic-bonkers outside.  The Bautista bat flip flipped Toronto on its head!

Think about it.  We were down 0-2 to the Texas Rangers in a series that’s best out of 5.  We caught up 2-2, but then the strangest-weirdest-most-bizarre thing happened.  Our bat catcher Martin, in what was supposed to be an innocent play of him returning the ball to the pitcher Sanchez, ended it up ricocheting the ball off the bat from the Texas batter when he was stretching between plays.  The ball rolled slowly and the batter had this dumb look on his face.  No one seen this before.  Not even the umpire knew the rule.  But the guy on 3rd sprinted home, even while the umpire was calling a time out.  Wtf?

So all umpires huddled up for what felt like an hour, they had no idea what to do about this, but after a very knucklehead deliberation, they decided to score the run!  Oh, the city was pissed.  Full cups of beer took flight and descended on the Rogers Centre turf, a non-roster Jays pitcher was ejected for mouthing off, a riot was festering.  Mothers with toddlers in hand started to cry, the Jays themselves had to stand on top of the dug out to plead with the fans to cut it out.  But we were pissed.  And the Americans think we’re so polite – Not now please, thank you.

RELATED: Why Not You?

It’s now the bottom of the 7th and the game is so annoyingly tied 3-3.  But wait, 1 Jays runner on base, 2 Jays runners on base, and here comes Bautista.  You should see his face, he’s pisssssed.  The pitcher clearly didn’t recognize Bautista’s anger and he threw a fast ball right down the middle.  Bautista cranks it.  Stares at it.  And then, the bat flip.

The bat flip is world-class.  It’s iconic.  It was necessary.  It says so much.  It says don’t ever let anybody cheat you.  Don’t ever take shit from anybody.  Don’t ever under estimate the heart of a champion.  And never, and I mean never, say die.

When adversity slaps you in the face – As it does for all of us; grab your will power, give it your best shot, and crank it.

The Jays went on to win that game 6-3 and drank a lot of champagne that night.  But unfortunately lost the following series to a tough KC Royals team in 6.  But we will always remember Bautista.  We own that moment.  And one day, when the going gets tough, and we need to knock one out of the park, we’ll know it’s possible, because we’ll remember exactly where we were when Bautista did, the bat flip.