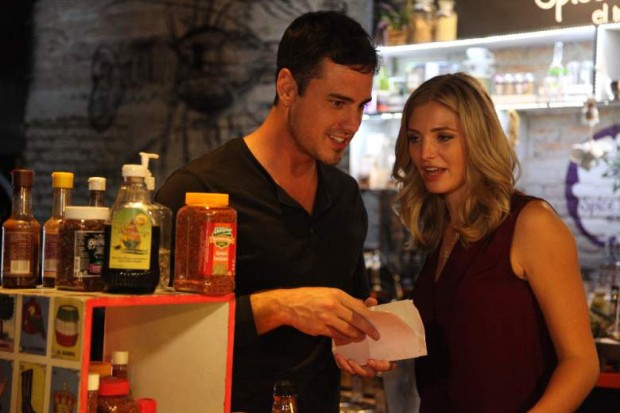 The Bachelor: A Taste Of Mexico

After an emotional meltdown in Vegas, Olivia was back on her game last night. And by back on her game, I mean as cringingly confident and shark-like as ever. In line with the legendary predator of the deep, Jaws lurked this episode open mouthed and in search of vulnerable prey. More on that to come. The lucky ladies flew to Mexico and rocked out shorts and off-the-shoulder ensembles while we bonded over pictures of snowmen in Times Square.

The first date went to single mom Amanda. Ben must have been inspired by Twilight, because he decided the best way to start the relationship was by visiting the sleeping girls’ room as they slept. Needless to say, a lot of heads hid under covers in the unforgiving light of day. Sporting a retainer, a flustered Lauren H was reassured when Ben said he wore a retainer, too. So. Cute. Amanda made us all want to scream at our screens when we spotted her “I-woke-up-like-this” cascade of curls. In case we weren’t sure Ben needs a girl as obsessed with flying as he apparently is, the pair took to the skies via hot air balloon. (I’m personally rooting for a dirigible on the next date). The two landed in an open field. This time around, there was no wilderness hot tub to heat things up. As they chatted over champagne, it became clear that Amanda is very, very nice. The date was about as lively as the dulling grass behind them. That night, the glammed up pair talked about Amanda’s unfaithful ex, and Ben sweetly told her that she “deserved better.” He said he could see a future with her and they kissed.

Things spiced up on the group date, where everyone piled into a classroom to learn some Spanish. Ben repeated romantic phrases all around, but when it came to Jubilee, she refused to hold his hand and came back with: “You said that to the last four girls.” *mic drop*. Outing the elephant in the room with this mathematical observation didn’t win any points with onlooking contestants. Still, she’s refreshingly honest.

Next, the group headed to the kitchen and partnered up to cook some authentic Mexican dishes. With a romantic meal on her mind, Jaws snatched Ben up. Newly ‘single’ twin Emily watched closely as Ben suggested to his partner that she try out some fresh mint. The sleuth deduced that along with ugly toes, Olivia is also the bearer of bad breath. Still, the two looked cozily intimate throughout the challenge, which might explain how our guy ended up burning the very challenging dish of…bread. The judge summed it up by describing the pair’s end product as “dog food.” Ouch. Apparently this was the episode of epic burns, on multiple levels. Jo Jo made us wince with repeated references to her “taco.” “And I know it’s delicious.” We’ll just leave that comment there. Despite working awkwardly silent together, Jubilee and Lauren B passed the taste test with flying colors. Olivia noted her own “Ben-giddy smile” and made sure to tell us that “it’s not leaving.” Your mouth is constantly open, Jaws. So yes, we noticed.

Later, teacher and chicken impersonator Lauren H scored her first one on one day with Ben. After just witnessing Amanda’s date of serious soul searching, seeing Ben and Lauren H together was a breath of fresh air. They ventured to a fashion studio, where the pair played dress up and laughed over floppy hats. Lauren then had to walk the runway alongside a towering group of models. Ben told her that she was the most beautiful woman there. At first, they seemed so comfortable with each other that we were ready to set sail and friend-ship them. However, Lauren H’s open honesty and positive outlook (the ‘unfaithful ex’ theme struck again) proved to Ben that there was something more there. The date ended with a pretty passionate kiss that sets this chemistry case to rest, at least for now. Back at the hotel, Lauren B and Ben smooched on a very public sidewalk. Jubilee watched as other women found time with Ben, and regretted her lack of assertiveness. The Bachelor finally found her to talk, but he was rejected again when he reached for her hand. This was a final straw which had Ben asking, “How is that supposed to make me feel?” Jubilee tried to backtrack, and with her persistent pursuit for a straight answer, Ben finally confessed he couldn’t see a future with her. Jubilee went home declaring herself “unlovable,” just like our past castoff bachelor.

Everyone was shaken when Ben announced that Olivia got the rose. Ben claimed they had “reconnected” and Olivia felt the “electricity” between them surge back to life. There definitely were sparks flying, but it was coming from the other women when the winner later compared Amanda to “an episode of Teen Mom.” With that first blood drawn, the hunt for Jaws was on. There’s nothing more beautiful than seeing the Bachelor tradition of women uniting against a common enemy. Luckily, this time around it was pretty justified. Amanda looked on the verge of tears, but Emily had no problem telling us how she felt with a stream of (sadly) beeped out words. She even went off to find Ben. In the show’s history, the tattle-tale has a bad track record when it comes to surviving the rose ceremony. Fortunately for Emily though, Amanda also confessed to Ben that she was personally “victimized” by this real life Mean Girl. Just as this drama was unfolding, we were given the ultimate painful cliffhanger: TO BE CONTINUED. *throws popcorn.*

Never fear, we caught a glimpse of next week, and it’s Ben standing at the edge of a steep cliff overlooking some serious waves. Was this shot necessary? Probably not, but Ben and a cliff is a hot combo none of us will object to. Will Jaws continue her reign of terror, or will true love win the day? Tune in next week to find out, Bachelor Nation!