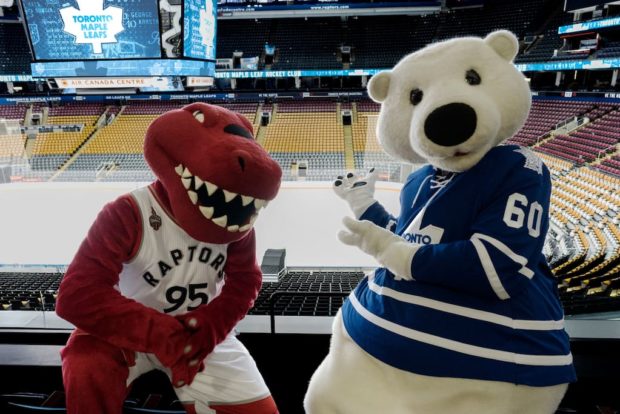 Brace Yourself Toronto, The Playoffs Are Here!

Toronto is a major sports city. Toronto knows it, Canada knows it, and the US of A is damn well starting to know it.

So let’s take a look at some direct correlating evidence to support my claim: attendance numbers from this season and how our teams rank in their respective leagues.

The only other city with a top 5 ranking in these sports ? …

None. Trick question. Want to take out soccer because, you know, it’s soccer? Fine. Chicago is the only other city with a top 5 attendance in NBA, NHL, and MLB. We know that Toronto is mostly known as a hockey town to outsiders, but recent playoff runs from the Jays and Raptors have shown the world that we love our gahd damn sports, we sure as hell love to support our country, and I guess we like to party. The last time the Leafs and Raptors were in the playoffs together was 2002. That’s a long fucking time. There was no Maple Leaf Square / Jurassic Park madness, no social media 24/7 access, and for anyone under 34 years of age there was no legal drinking while watching the Buds & Raps. We all know how nuts this city gets when one team is in the playoffs, but two? Dear lord…

So how are we going to do? The Raptors got 2 vicious defensive ballers in P.J. Tucker and Serge Ibaka. For you non-basketball fans, defense is HUGE in playoffs where every single possession matters. The Cavs look beatable for the first time in awhile and if there is any year the Raps can challenge for the East and head to the finals, it’s this one.

Not many expect the Leafs to go far in the playoffs, but who knows? Washington has a storied history of choking and this young, fast, fiery Leafs team has been proving people wrong all year. No matter what happens, it will be fun to see the youngins get invaluable playoff experience against an offensive juggernaut in Washington. It will also be fun to see the kids immensely struggle to grow a playoff beard, something I can relate to. Even as a 21 year old, the best I could muster in a playoff run during my last year of football at the U of G was a dirty neck beard. I feel their pain. What does the 2017 Leafs and Raptors playoff tag team mean to this city? It means we are all about to have a hell of a good time. Whether you are a die-hard fan or just like the way the blue Leafs gear looks, it doesn’t matter. We’re in this together. The high fives, groans, “what kind of bullshit call was that!?” moments, and everything in between. Oh, and if you’re one of those “bandwagon fans are the worst” type people, miss me with that nonsense. We will take everyone we can get. Whether it’s at the ACC, Maple Leaf Square, Dog and Bear, or your apartment… the bandwagon is wide open. Hop on. That’s the beauty of playoff sports; we go through the roller coaster together (and BELIEVE ME, it will be a roller coaster). Let’s enjoy the ride while it lasts because there isn’t much in this world that can bring so many people from different walks of life together the way sports do. It’s a much-needed break from the seemingly endless stresses in the world right now, and definitely a needed break from society constantly finding things to get offended about. I am all for a social media timeline filled with Raptors and Leafs talk over someone complaining about how the new Honey Nut Cheerio’s commercial is insensitive to the growing “Save The Bees” movement. From the highest of highs to the lowest of lows, these are playoff moments we will remember for years to come. I bet most Toronto sports fans still vividly recall where they were for the “Bautista Bat Flip”, game 5 of the 2015 ALDS. I was in a sports bar on the water and the entire place ERUPTED. It was like all of us got called down on The Price is Right at the same damn time. I am talking strangers hugging each other… and not just a couple hugs, A LOT of manbraces. These moments stick with you. I mean, I still clearly remember standing 3 feet from my TV in 1993, nerves racing, when Joe Carter hit his walk off home run. Not only was that 24 years ago, but I was SEVEN years old and still can recall what shirt I was wearing. I can barely remember what I wore yesterday. Sports moments shape our history, the good and the bad. I intensely remember being 1 row behind the Nets bench with my friend Steve for game 7 of the 2013 Raptors playoffs. When the Raps lost, we couldn’t move for at least 15 minutes. We just sat there paralyzed from the intensity of the 4th quarter and the shitty outcome, refusing to believe what just transpired. Nobody knows what’s going to happen with the Leafs and Raptors in the coming postseason, but I know for certain that this city is going to be electric. Soak it in, because it’s going to be special. Sick days will rise, bonds will be made, and livers will fall.

Toronto is ready for some playoffs.