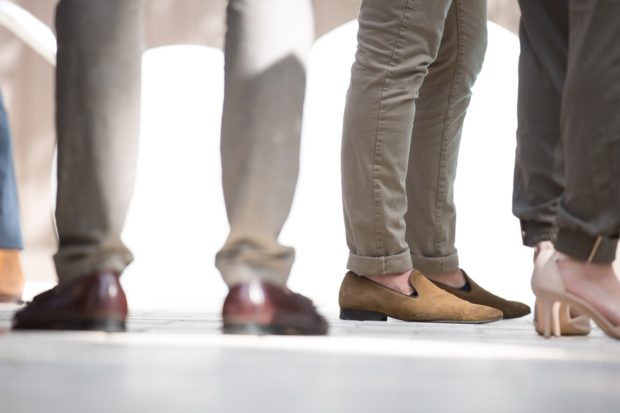 I used to think it was cool to wear sneakers with a suit. Now I’m not so sure. What gives? This is one of those trends that, at one point, really gave a man’s outfit a little personality. Problem is, today, that personality reeks of being stale. In this day and age of casual Fridays and offices more comfortable with chinos than blazers, the “sneakers with a suit” thing comes off as someone trying too hard. It’s not really rebellious so much as it’s lazy. You went through all the effort to put on the suit, get yourself a pair of appropriate shoes to go with it. Save the sneakers for the blazer and t-shirt and jeans combo. If you don’t want to wear patent leather or a cap toe, there are plenty of stylish kicks you can sport and still feel you’re not stuffy. Try a pair of double monk straps or even a slick pair of Chelsea boots. Both are far better than your old Adidas.

I’m a father of a toddler and I’m often having to jump up and run out the door on a moment’s notice. My wife gives me a hard time, but my favourite shoes to wear around the house and when I’m running errands is a pair of Crocs. They’re comfortable and I can easily slip them on and off in a couple of seconds. Plus, if my son spills his juice box or spits up on them, they’re easily washed off with no problem. My wife says I look ridiculous, but I think I’m being smart and practical. They also compliment my summer clothes. What do you say?

Your wife is right.