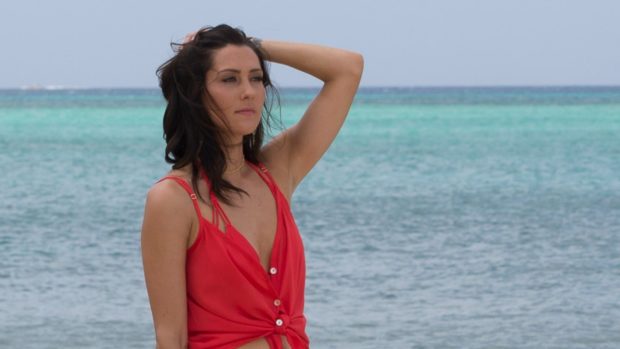 And just like that, we’re in the Bahamas! Becca is down to six boys, and we finally received confirmation the rumours are true – Colton is indeed a virgin. Yes, wonders never cease!

The episode began with Becca receiving a lackluster pep talk from Chris Harrison in her hotel room. OMG! They are actually making him work for his money! I don’t think he’s had this much screen time since Trista Sutter’s season in 2003. Becca took the pep talk as an opportunity to confirm that she is actually falling for someone. My first reaction to this was, “Yay! Jumpy claps! I’m so glad she’s over Ari.” Then I remembered the person she’s falling for is probably Garrett, the transphobic Trump supporter who hates immigrants, and I stopped squealing with delight. 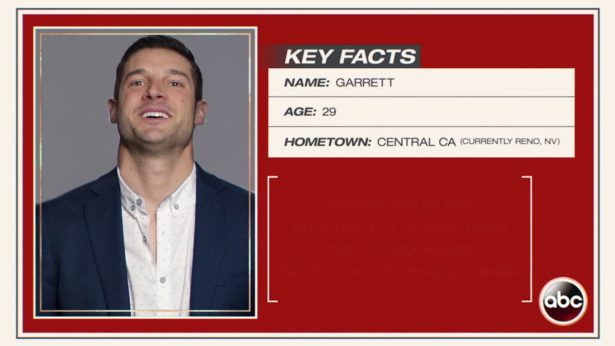 Because it’s the last episode before hometowns, the seventh installment was heavy on the one-on-one dates. The first outing, however, was the most memorable. It went to Colton, and we received confirmation that the rumours are true, he’s still rocking his V Card the way he rocks all those muscle T’s.

Now, there’s nothing wrong with being a virgin. I say you do you, and that means, don’t do anyone else until you’re ready to. But it seems Becca objects to that sentiment.

Becca and Colton began their date enjoying a sexy day on a yacht. Becca described her suitor as “a block of muscle.” He grabbed her ass with finesse, and she laughed a lot. They then went diving for conch, which is an aphrodisiac. Without missing a beat, Becca told the cameras, “We don’t need aphrodisiacs.” The dramatic irony was pretty on the nose; Becca wanted to have the sex with Colton, but he’s never had the sex before. What narrative conflict!

Colton’s virginity admission came out during dinner. He primed Becca by telling her he had a secret that was hard to “articulate,” and then confessed that his P has never penetrated a V. The big surprise, however, was that Colton is not a 26-year-old virgin for religious reasons. He blames his virginity on being busy playing football in university. Now, based on what I know of American Football Culture, I always assumed being a star football player made you more likely to get laid, certainly not less. I mean, I’ve every single episode of Friday Night Lights! I thought I understood that world. But I guess there’s no monolithic sports star experience.

To say Becca’s reaction to the virginity reveal was “an overreaction” would be a massive understatement. She abandoned Colton at the dinner table to huff off and ruminate. Her effect was so agitated, you’d have thought Colton confessed to being a registered sex offender instead of someone who’s never had sex. I ‘ve rarely seen someone handle an admission of virginity so poorly, and it was disappointing coming from Becca, someone who usually behaves so admirably.

Becca did rally eventually. She returned to the table after some time and gifted Colton with a rose. He was the first of Becca’s contestant to secure a spot for “Hometown Dates” next week, but it was clear her heart wasn’t in it. It was the epitome of a “Pity Rose.”

Garrett was the next guy to receive some one-on-one time with our girl. And for the second week in a row, Becca was required to take a suitor on a tiny airplane to survey the landscape. That begs the question, why do the show’s producers think aircraft are so romantic? In reality, they’re cramped and noisy. Anyway, I was predisposed not to like this date no matter what, because Garrett likes posts on social media claiming the kids from Stoneman Douglas High School are paid actors, not survivors of a real-life school shooting. So yeah, f-ck him.

Unfortunately, Becca, who attended The Women’s March, didn’t have access to social media while filming. I’d like to think that’s the reason she was taken in by Garrett – who received a rose and claimed he’s progressed to thinking of Becca as a “potential wife” – is because she’d never seen his Instagram. This is just proof that you should ALWAYS stalk your new boyfriend on social media. That’s just common sense, ladies. Let Becca be your cautionary tale: she was so besotted with Garrett the Stealth Bigot that she straight up cried on their date. We’re talking real tears, made of water. Ew! Please excuse me while I go vomit up my breakfast.

The third and final one-on-one date went to Blake. It involved a performance from The Baha Men, the musical geniuses who gave us everyone’s favourite earworm of the year 2000, the classic “Who Left the Dogs Out?” Unfortunately, they performed their new material instead of their masterpiece.

Blake proved to be an able dancer, and Becca loved dancing up on him. Not that I blame her. Blake is HOT. It didn’t exactly come as a surprise when Becca confided in the cameras about how she’s falling in love with everyone’s favourite sales rep. Since she didn’t say the same of Garrett, I’m holding out hope that Becca picked the adorable Blake instead of that transphobic racist. Maybe I’m too naïve and optimistic…

It goes without saying, but Blake received his rose. And with only one rose left in play, Leo, Jason and Wills headed out for a Volleyball-themed group date to determine who would survive another week. It was like the Hunger Games, but with more manbuns.

Speaking of manbuns, Leo was the first to get the boot. I was sad to see him go, as the softcore porn actor has become my hairspiration. Plus, I think he would have acquitted himself well in the Fantasy Suite. Couldn’t Becca use some sexy fun times after what Arie did to her. But Becca didn’t see things my way and sent Sexy Leo home because their connection was lacking. For his part, Leo got petty and accused Becca of choosing the other guys over him because they could give her a nice house, whereas he, Leo, couldn’t give her a house, but could give her real love. I’m no expert, but I don’t see why love and home ownership have to be mutually exclusive.

Finally, the date was down to Wills and Jason. Now, those two gents are my two favourites. So this showdown was particularly hard for me. But in the end, Jason emerged victorious. In other news, I finally realized that Jason looks like a grownup version of Timothee Chalamet in “Call Me By Your Name”. He’s very comely.

While I was happy for Jason, my heart bled for my boy Wills. This angelic young man was stricken when Becca announced her decision. He and Becca parted amicably, but Wills was still in disbelief that the titular Bachelorette would not be “his person.” I hope the dude gets super laid on Bachelor in Paradise.

See you all next week for hometowns! In the interim, let’s pray to the reality TV Gods that Garrett doesn’t win!