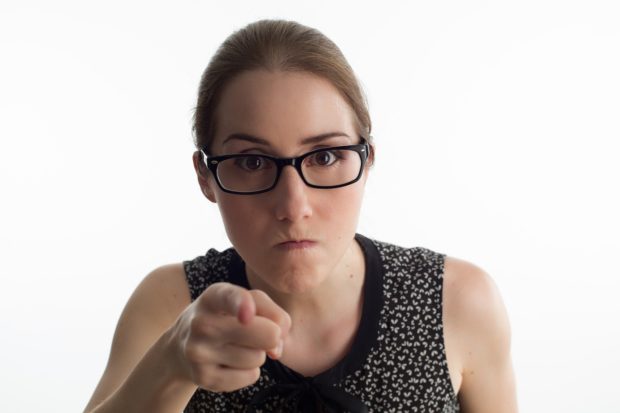 Creative Ways To Deal With Catcallers

1. Flip The Script On Catcalling

Catcalling is upsetting because it gets under your skin, and often, it stays there. It’s impossible to un-hear the vile things some men shout while we’re waiting for the bus. Those comments can give you nightmares for days on end! That’s why it can be empowering – and fun – to flip the script. Street harassers like the power rush of upsetting someone. However, you can snatch that power by pretending you’re not upset. Instead, try acting like you’re totally into it. Next time a guys shouts, “I could marry a girl with tits like you,” respond like so: “OMG, you proposed! OF COURSE I’ll marry you. When can I meet your mom? Let’s plan a destination wedding in Cabo!” You could freak the guy out so badly that he loses the will to harass women altogether.

This is a variation on the first strategy, but it goes one step further. Pretend you’re into his lewd taunts, walk up to the dude, and ask to put your number in his phone (Grab it out of his hands if necessary). Obviously you won’t really bless him with your digits. Instead, check to see if he has the Venmo app. If he does, send yourself $50. Hey, France just outlawed catcalling. If the Canadian government won’t take that step, it’s time we women started imposing our own fines.

Education can be an antidote to sexism. Try combatting a catcaller’s ignorance by offering some free adult education. Next time a guy shouts, “Nice ass!, baby” when you’re out for coffee, consider shouting a Gloria Steinem quote in their direction. My personal favourite is “A woman needs a man like a fish needs a bicycle!” Audre Lorde quotes are another great standby. You might tell your harasser, “The master’s tools will never destroy the master’s house!” Other highly quotable feminist icons include bell hooks, Jessica Valenti, Roxanne Gay, Susan Stryker, Chimamanda Ngozi Adichie, Ann Friedman, Hannah Gadsby, and Margaret Cho. Who knows? Dropping that feminist wisdom could shame your cat caller into abandoning his misogynistic ways! Hey, stranger things have happened…