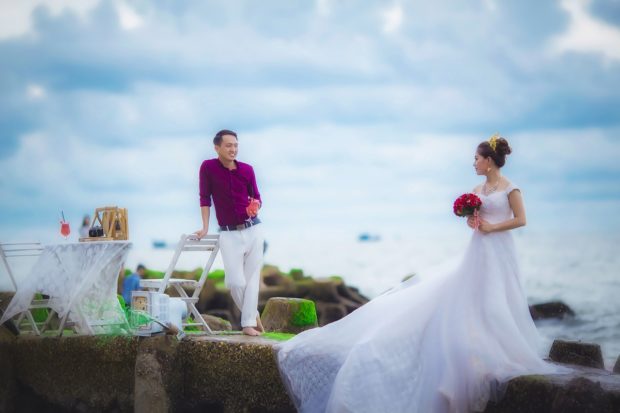 Four Types of Weddings You’ll Attend In Your Thirties

“Sh-t or get off the pot” may be an indelicate saying, but it’s the best way to describe a certain sort of wedding. You know the type – your friends have been together 12 years (or something absurd like that). They probably met over cafeteria tater tots back in uni, and they’ve been in it ever since. Well, almost ever since. They’ve likely broken up at least five times, but always reconcile out of a mixture of insecurity, fear of the unknown, and laziness.

By their wedding day, this couple’s parents have pressured them to seal the deal for approximately a decade, and they’re finally giving in to the social pressure. For them, getting married isn’t a major life decision so much as it is the default thing to do. I mean, they already share a dog, an apartment, and an instant pot. At this point, they’re not going anywhere.

You’ll known you’re at a “sh-t or get off the pot wedding,” because the happy couple’s outfits will probably be ill-fitting. Why is that? Well, they’re so apathetic about getting married, they likely missed one or more appointments with their respective tailors. In addition, their first dance will be to whatever song they first made out to on the dance floor of your university pub. There’s a 73% change their song will be either Justin Timberlake’s “Sexyback” or “London Bridge” by Fergie.

2. “The Bride Is Secretly Pregnant” Wedding

This happens a lot in your thirties. All those alarmist statistics about how women’s fertility declines in their thirties mean many couples – even traditional ones who believe in marriage and that lot – may well start trying before the big day, assuming it will take them months or years to get pregnant. Of course, sometimes conception does take a while, but we’ve all had our fair share of friends who unexpectedly get preggers on the first go.

In this case, the bride will probably be discreetly pregnant. She’s likely still in the first trimester, and it’s too soon to tell people, but her boobs are spilling out of her dress thanks to those pregnancy hormones, and you’re convinced she’s actually got gingerale in her champagne glass. Odds are, the thank-you note you receive in the weeks or months following the wedding will probably contain an invitation to a baby shower…

3. The “They’re Definitely Getting Divorced” Wedding

If you’re in your thirties, at least one or more of your friends will have decided settling down means “settling.” They’ll see all their partnered friends and assume they need a spouse, too. It’s hard to blame these people for the mistake of settling for a mediocre marriage, given the pressure society places on people to tie the knot by a certain age. At the same time, you’re pretty sure your buddy couldn’t possibly be into this person they gave air freshener to for Christmas. You’ve seen your friend when they’re into someone, and this isn’t it.  They’re always ditching their partner at parties, and they can’t even fake a convincing smile for the  photos they post on instagram! Obviously, this relationship is doomed.

You’ll know you’re attending a settler’s wedding, because you’ll feel uncharacteristically stingy while choosing a wedding present. Instead of purchasing something off the registry, you’ll feel inclined to regift whatever gift your Aunt Debbie gave you on your last birthday. Yes, that means the “happy couple” will probably be unwrapping a throw your aunt got for free when she purchased $100 of merchandise from Indigo. It’s okay, because at least they won’t fight over who gets that polyester blanket in the divorce!

4. The “We’re So Happy We Found Each Other” Wedding

Dating after age 29 is about as much fun as getting a pap smear. That means anyone who finds their one and only after this age feels very grateful. They’ve seen things in their time on Tinder. By this point, their fingers are tired and they’re relieved they’ll no longer have to “swipe right.” As a consequences, this couple’s wedding will be highly emotional. There will be lots and lots of happy tears.

These weddings are usually lavish, as the couple are dying to celebrate their love with a plethora of symbols and rituals. Expect a harpist to play during the ceremony, a signature cocktail, and some sort of party favour with the happy couple’s faces on it. The individuals getting married will usually issue a lot of platitudes during their speeches. Expect to hear statements like this: “When you know, you know!” or “True love is worth waiting for.” If there’s a bride at the wedding, her most sexist uncle will make plenty of comments like, “Caitlyn’s getting married, so that must mean hell has finally frozen over. Get it?” Yes, uncle Dave, we get it. We’re not laughing because it’s not actually funny.

RELATED: How Effective Are Popular Forms of Birth Control?