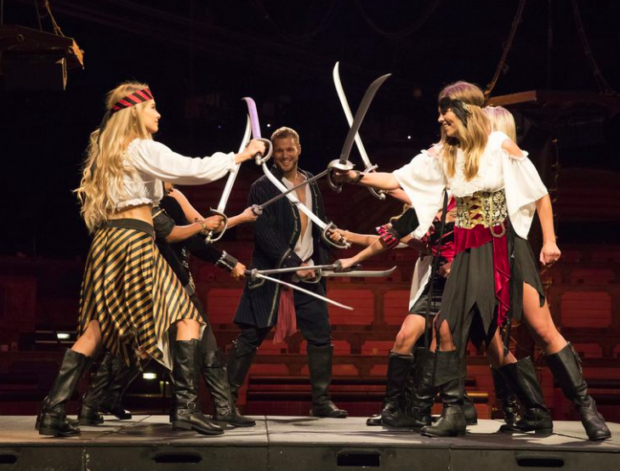 They say the third time’s the charm, but I’m not sure that applies to third episodes. At least not on The Bachelor. This week’s episode was full of turmoil, with much male shirtlessness sprinkled in for good measure.

The first group date of the episode was pirate-themed. This was a thinly veiled excuse for the women to use a lot of phallic symbols. There was MUCH sword fighting. There were also bad puns. My favourite was when Demi declared, “I don’t want to be another yo-ho-ho.” That woman should be America’s next poet laureate!

Because Hannah B. told the producers she she was afraid of doing on a date with her pageant nemesis Caelynn, this ensured BOTH women would be attending the pirate date. And that begs the question, has Hannah NEVER seen a single episode of The Bachelor? You ALWAYS have to use reverse-psychology with the producers. NEVER reveal your weaknesses or they will exploit them! This is, like, Bachelor Nation 101.

The pirate date involved a challenge where the ladies competed to “free” Colton. I enjoyed this gender-flipped “Damsel In Distress Narrative,” and of course Caelynn was the one to save Colton in the end, causing Hannah to have a meltdown that culminated in her confronting Colton about Caelynn’s true colours.

Strategically, it’s always a poor decision to waste one’s precious one-on-one time with the Bachelor on bashing other women. Given that this is the show’s 23rd season, you’d think the women would know that by now. Why would you empty your 401K to buy a million bikinis and sparkly dresses without doing your homework first? Do your research, ladies! Entire books have been written about The Bachelor. I’m sure they can be checked out of a local library…

Anyway, Hannah B. decided to trash Caelynn. However, the Alabama native could not provide a single concrete example of what Caelynn had done to wrong her. According to Ms. B, Caelynn is deceitful and manipulative, but there was no supporting evidence to prove this slanderous statements. It’s also important to note that it was Hannah who started trashtalking her rival to Colton, and not the other way around. Methinks manipulative is as manipulative does…

Obviously, Colton immediately approached Caelynn to get her side of the story. For her part, Caelynn played it perfectly. She revealed nothing and managed to sexy cry, which Colton found endearing. BTW, a “sexy cry” is the opposite of ugly crying, which is what I do. A sexy cry is when your eyes well up with a few tears but your face doesn’t get red and your nose doesn’t run like mine always does. For that superb performance, Caelynn was rewarded with the group date rose.

The episode’s one-on-one date went to Elyse. Elyse is one of the “older girls” for whom Demi feels sorry. Well, 31 year-old Elyse proves that thirty-something ladies are not to be pitied! She OWNED her date like someone who recently paid off the mortgage on a three-bedroom house.

The date started with Colton taking Elyse on a helicopter ride to San Diego. The views were stunning, but the final destination was underwhelming. Now, the premise was sweet. They were escorting sick children on a day out at an amusement park, taking them on rides and serving them ice cream. However, why did they have to take these kids to a sad, off-brand Disneyland? ABC, the channel on which The Bachelor airs, is in fact owned by Disney. And yet, they ended up at a sad theme park that looked like it had just survived the Zombie Apocalypse. Next time, I humbly request ABC take the children to a more premium amusement park.

After the kids went home, Colton and Elyse headed back to LA for dinner. At dinner, Elyse became my definitive favourite. Seriously, you guys! I love her more than those cheesecake sticks I buy at Pusateri’s when I’ve had a bad day. Elyse confided in Colton that her sister developed a tumour while pregnant. Tragically, her sister died shortly after her baby was born. Elyse explained how this event had changed her, how the grief had shaped her and made her love her sister’s child all the more. Basically, Elyse isn’t just a makeup artist from Alaska, she’s an ANGEL ON EARTH. Colton seemed pretty impressed with her, too. Obviously they made out. There was tongue. Colton REALLY likes kissing with Tongue.Yay! Victory for the so-called “older girls.”

The second group date of the episode was a bizarre crossfit-inspired day where the ladies competed to be declared The Bachelor’s Strongest Woman. This involved very gendered challenges, like pulling a one-hundred pound wedding cake across a field. It was strange. Naturally, Colton didn’t wear a shirt. The Wardrobe Department must be saving a ton of money on clothes this season!

Anyeka won the Crossfit-style challenge, but all she got was a weird looking trophy. There was no extra time with Colton. For some reason Terry Crews and his wife Rebecca King-Crews made an appearance on this segment. They were delightful as always, and it only served to further my fantasies about how amazing a husband Terry Crews must be. I mean, I already knew he was a sexy feminist, but now we know he’s a fan of The Bachelor, too. Swoon!

After the competition, the women retired for a cocktail date with Colton. This was when Colton decided it was time to get to know Caitlin better. When he prompted her to share details about her life, Caitlin declared she had no life experiences worth sharing. This begs the question, how can a woman in her twenties not have seen or done anything of note? I mean, the woman has a job. Has she never been on a single vacation or anything remotely interesting? If she was really stuck, why didn’t she just tell him about her career as a realtor? This was an embarrassing showing from the season’s only Canadian contestant. Caitlin was so dull, Colton declared, “You’re not for me” and sent her packing during the date, a basically unprecedented embarrassment!

Meanwhile, back at the house, the rivalry between Hannah B and Caelynn reached Kanye West versus Drake proportions of epic. The women were recruiting allies, and contestants seemed only too eager to take sides. When Colton sought clarification about where their enmity started, Caelynn was circumspect, but explained her former roommate Hannah turned on her when Caelynn placed at Miss USA and she didn’t. Wow, pageant politics sound complicated!

Of course, Hannah told Colton the opposite. She declared Caelynn manipulative and deceitful. She was also convinced Colton couldn’t possibly like her if he had a crush on someone like Caelynn. Colton obviously didn’t know who to believe. It’s now clear that both women’s chances are shot. The pair are basically guaranteed to end up on the dreaded two-on-one date. Right now, this rivalry is playing out like a remake of the classic teen movie Drop Dead Gorgeous. Let’s hope everyone gets out alive in this version…

The episode ended with the requisite Rose Ceremony, where DJ Aggro was sent home! This made sense, as Colton probably wouldn’t have been allowed to take her dog through Singaporean customs. Sometimes our love lives come down to logistical decisions…

Until next week, dear readers! Can’t wait to see what goes down in Asia!