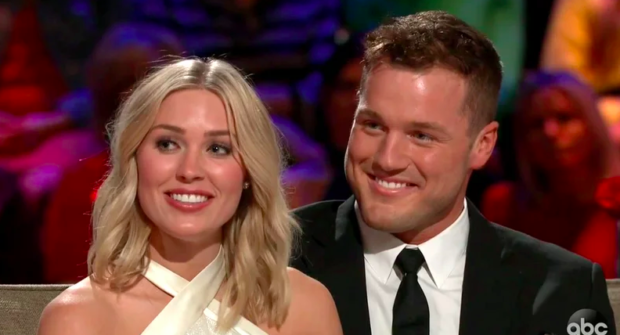 Well, that’s a wrap! Colton has officially found love with Cassie! And the untraditional trajectory of their story basically revealed the fundamental flaw with The Bachelor’s premise; no one is actually ready to be engaged after six weeks! It was a revelatory – dare i say it? – revolutionary season! It subverted everything the show is supposed to be, and came out better for it.

Part II of the final began with Colton beseeching Cassie to give him another chance. As proof of his love for her, her relinquished his title as The Bachelor, that strange designation that positioned him as the one in control, the leading man with the power to anoint a winner, as though his love were a prize. When Colton informed Cassie he’d sent both Tayshia and Hannah G. home for the mere possibility of rekindling things with her, the girl straight up laughed. It was awkward to watch; however, after Colton reassured Cassie he had no agenda beyond wanting the chance to get to know her better, Cassie granted Underwood a second chance. Of course, it probably helped that he was able to bribe her with a trip to Spain. When I was 23, I probably would have gone on another date with a guy in exchange for a free trip to Majorca, too.

Colton’s family were assembled in Spain to meet Cassie. Ostensibly, there were there to meet his “Final Two.”Colton’s relatives were therefore taken aback when they discovered there was just one remaining woman. And not only that, but woman who’d dumped their son days before. That was not a plot twist they were expecting!

Now, I’m not a parent yet, but I’m pretty sure I’d want my hypothetical progeny to choose a partner who truly loved them, or at least liked them enough not to leave them in the middle of a Fantasy Suite date. For this reason, I get why the Underwoods gave Cassie a chilly reception. Colton’s family were rightly concerned for his welfare. His mom and dad both feigned diplomacy, but the subtext of their disapproval was clear. While they couched their objections to Cassie with concern for their child’s wellbeing, it was obvious they meant, “What the hell, Colton? Why did you choose the girl who rejected you? Where did we go wrong? Did we let you watch too much TV? Did we not hug you enough? How did this happen?????” To make matters worse, when they asked whether to call Cassie his girlfriend – since she sure wasn’t his fiance – Colton said was too soon to tell. Colton and Cassie were still in what the kids call a “situationship.” So there you have it, Colton basically brought his crush to meet his parents. How very 8th grade of him!

After a tense meetup between Cassie and his family, it was time to attend to some unfinished business, i.e the Fantasy Suite. As Chris Harrison’s narration reminded us about every fifteen seconds during the finale, Colton was still a virgin. Would he finally be having sexual relations for the first time? That was the million dollar question…

Even despite the cringe-y references to Colton’s sexuality, it was on their one-on-one date that I finally began shipping Cassie and Colton. To start their date, the blonde youths repelled down a cliff. This was a super subtle metaphor for taking risks in a relationship. As they repelled, Colton explained how falling in love is “dangerous,” which yes, it is, sort of like literally jumping off a cliff. I will not miss this show’s heavy-handed metaphors in the off-season.

Once their feet hit the ground, it was time for a heart-to-heart. And you know what? When Cassie finally opened up, I found her charming AF. According to Cassie, she was in a marriage-track relationship in college. However, the more serious she and her ex got, the more controlling her became. As a consequence, Cassie developed a fear of intimacy she’s found it hard to shake. It was a story I’m sure countless women out there found relatable, including me. Suddenly, I no longer saw Cassie as fickle; I saw her as someone working through trauma as best she could. By the end of their date, I was officially rooting for them. The flaw wasn’t in their connection; the flaw was in a show where the accelerated timeline exacerbates people’s fears surrounding intimacy, a timeline that doesn’t give anyone room to breathe. Now, I know this tight timeline is the very concept of the show, but I think we fans can lose sight of how unnatural The Bachelor’s premise is. Over the course of the season, it’s easy to forget these people have known each other for a matter of days simply because we fans are desirous of a happy resolution. That’s why it was so refreshing to see two people push back against the show’s unrealistic expectations. Colton and Cassie didn’t follow the show’s prescribed beats; they decided to have a real relationship instead of a showmance, and I loved it.

Of course, the matter of whether Colton got any nookie remains. Chris Harrison was obsessed with this question when he interviewed the couple at the AFR. Colton and Cassie are now officially “in love” and Colton has moved to California for her, but Chris couldn’t have cared less about those developments; all he wanted to know was if Colton has experienced coitus.

Whether Colton will lose his virginity was the central mystery of Season 23. It was The Bachelor’s equivalent to “Who killed Laura Palmer?” And boy, did ABC milk it for all it was worth! The entire season’s fixation on Colton’s virginity has been tiresome. He’s not the first 26 year-old man to be a virgin, and he won’t be the last. When we make a big deal of adult male virginity, we’re basically reinforcing a culture of toxic masculinity that makes sex synonymous with virility. Ew! Do better, ABC! Virgin-shaming is the ugly cousin of slut-shaming. They both suck, and neither one has any place on TV in 2019!

While Colton and Cassie refused to tell Harrison whether they’ve boned, Chris decided to “take that as a yes.” The man is relentless! Seriously, it’s like he’s a middle-aged man with the mind mind of a 14 year-old boy. He’s basically Tom Hanks in Big, which is a good movie, but like, not something you should model you life after! Can someone get Chris Harrison some therapy and help him develop a healthier relationship to sexuality?

Well, dear readers, this brings us to the end of Colton’s season. And for once, I think the titular Bachelor had a meaningful character arc. Colton began as a man child, who was super self-conscious about being a virgin. Not only that, but he was terrified of rejection; however, Underwood ended the season a brave risk-taker who didn’t give a hoot about whether the audience thought he’d lost his v-card. What a metamorphosis! Yes, we had a slight mishap last night, when he allowed Tayshia and Hannah G. to comfort him even while he was rejecting them. But despite that gaffe, I’m proud of Colton. For once, I’d say The Bachelor has ended the season a better man than when he started. I am truly happy for Colton and Cassie. I hope those two crazy kids make it!

See you in May, dear readers. The rumours are true; Hannah B. from Alabama will be our next Bachelorette. Until then, Roll Tide!

RELATED: The Bachelor Recap: What If Cassie’s Not That Into You?