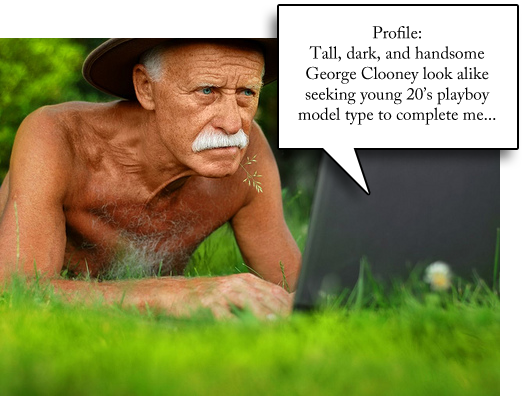 From Duds To Studs

It’s an all too common story.

Girl happens across boy’s online profile. He almost sounds too good to be true. The right age, the right height, physically fit, thinks that communication is the key to a great relationship and he doesn’t say anything stupid like “I’ll rock your world”. As well his photo, although somewhat blurry, appears to be the kind of guy you could actually introduce friends to!

After a few email exchanges it’s decided to meet for a casual introduction drink. Something local, something simple and something preferably with alcohol… wine works best.

Girl waits anxiously for boy in a quiet corner of the bar. He said all of the right things and had the right “look” (although that photo was a little blurry) and now the moment of truth. Boy walks into the bar, looks from left to right and then heads toward girl.

“Please don’t do this to me again God” she whispers to herself.

But it’s too late.

As he approaches and speaks, his online persona begins to crack and the man behind the right words and great physical stats reveals himself. It’s like a Life Channel makeover program but in reverse. He’s not the height, weight, or likely the age he professed. But most importantly, his online confidence level, style and ability to articulate his desires for life and his relationship seem to have been a complete façade.

While this story may not have happened to you, I can assure you that it’s a regular event for many.

But why misrepresent one’s self only to be left to address the cold reality in person?

Men do this for a few reasons:

It’s a numbers game. Throw spaghetti on the wall and something will be bound to stick. That’s the logic.

We are also socialized to believe that we must do certain things to attract a woman; things that we don’t even understand, never mind the fact that we may not even mean them.

Add to that the fact that most men are inherently lazy and therefore would happily hide behind a computer screen with a script instead of having to risk it all in person and in real time!

A script you say?

Yes, many women may not even realize that there are websites dedicated to scripting men through the online process. Disingenuous? Of course, but practical for the man who is playing a numbers game and is too lazy or unwilling to actually go out and learn about women for himself.

Unfortunately online profiles, or “marketing pieces” as they now seem to be, are seen by many men as the easiest way to transform him self from dud to stud.