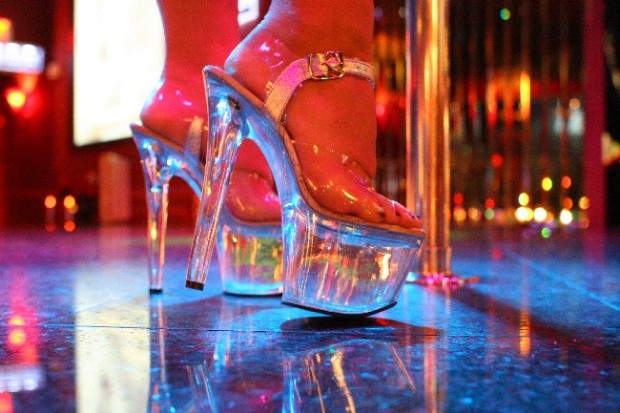 “We were at a friend’s bachelor party; we rented a VIP room at one of Toronto’s largest strip clubs. There were eight of us in total, some were married or in relationships and a few of us were single. Each one of us received a lap dance by an exotic dancer who was completely nude. Finally, she ended her performance on the lap of the groom-to-be. She placed one leg on one guy’s shoulder and the other leg on another guy’s shoulder, and she allowed us all to take turns having our way with her.”

“My friend and I were at a strip club for a few drinks. We were approached by the scantily clad working-women who tried convincing us to pay for a lap dance. Their tactics included flirtation, compliments, sitting on our laps and justifying why we should agree. ‘Your girlfriend will never find out.’ / ‘Let me rock your world so you can go home and rock your girlfriend’s world.’ We felt powerful and in control turning these women down, but had we had a few more drinks, there’s no way either of us would have resisted.”

“It was my best friend’s birthday. We decided to pre-drink at a strip club in downtown Toronto. My gift to him was three girls at the club to simultaneously give him a lap dance. All three women stripped down naked, removed his shirt and rubbed their bodies against his. He is in a relationship; otherwise I would’ve bought him the additional services these women were offering. These services included various forms of sexual activity.”

These experiences were shared by patrons who disclosed the types of activities which occasionally go down (pun intended) at gentlemen’s clubs. These men do not represent the majority of men who frequent strip clubs, nor do these scenarios represent what majority of men experience when they go. These scenarios are intended to exemplify reasons why many women are not comfortable with their partner going to this type of establishment. This article will identify a few more reasons.

Playground for temptation: Infidelity is a legitimate concern when considering the combination of alcohol consumption, a sexually charged environment and being surrounded by naked women enticing their audience on stage; who then proposition them to a more intimate experience off-stage with no strings attached. That’s when temptation can cause even the best of men to start thinking with their other head. A woman may trust her partner completely, but trusting his judgment while impaired by alcohol, in an environment which condones infidelity, is debatable.

Compare and contrast: Women working at strip clubs tend to be the type most men fantasize about; being in impeccable shape, often surgically enhanced. Men who have access to such (naked) women may cause a girlfriend or wife to feel inadequate or less attractive. This insecurity can lead a woman to believe her partner needs external visual stimulus to be attracted to her in order to make love to her, and cause her to feel self conscious in other areas as well.

Sexualization of women: Venues such as strip clubs portray women as sexual objects and do not support the notion of women wanting to be viewed as equals to their male counterpart. Arguably, these venues degrade, demoralize and demean women, encouraging lascivious, lewd behavior as men hoot, holler and ogle at women taking their clothes off for money.

There are varying view points on whether strip clubs are a positive or negative influence in society. This article is not intended to determine its controversy; it’s intended to shine light on the subject to initiate discussion within a relationship.

A majority of men view gentlemen’s clubs to be completely harmless, especially when they don’t overstep the boundaries of their relationship. Some women would disagree, however. These women should explain to their boyfriend or husband what they feel, so their partner can understand their perspective.

Encourage your partner to ponder how you would feel by his behavior at a strip club (e.g. ashamed, hurt, betrayed). Ask him if it would be considered appropriate if the things happening to him at the strip club were happening to him at a regular bar or club, behind closed doors, or in front of your very eyes.

Adding perspective may help further. Asking, if roles were reversed, how he would feel if it were you who went to saturate your senses by men with their chiseled and well endowed body parts, good looks and charm; if it was you who had these men wanting to dry hump your body with their nakedness.

Although gentlemen’s clubs appear to be accepted in society, it is your prerogative to define where they stand in your relationship with your partner. It is up to you to decide if they are harmless or justified infidelity.

Syra A. Jan is a Relationship Strategist who specializes in creating successful and fulfilling relationships. She assists individuals and couples by identifying issues and equipping them with personalized tools and systems to develop and maintain long lasting, healthy and happy relationships. Syra has a background in Psychology from the University of Toronto. She has also completed a Post-Degree Program and continues to further her education in Relational Psychotherapy. Syra has over ten years of practical experience developing solution-based strategies, which will help clients achieve positive change and growth in their personal lives and relationships. Contact Syra by email: strategiesbysyra@gmail.com