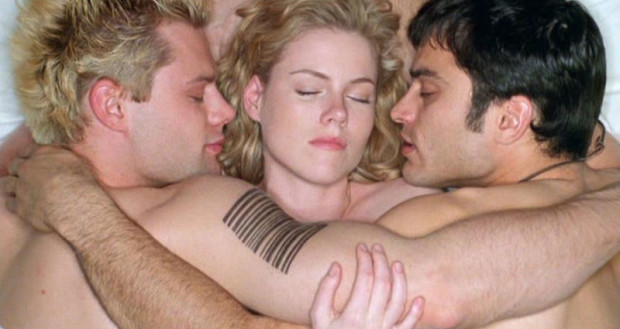 Your Girlfriend Wants To Invite Another Man To The Bedroom?

Your wife or girlfriend tells you that she has a fantasy of being with 2 guys. How do you handle it?

I’m sure there are some extreme readers of the Allman Report who would say, “Hells yeah, call up my buddy Mike!” or on the other end, “Break up with that whore immediately!”

But for most of us, this would raise some questions about what the heck to do about that announcement.

Now understand, MOST women are likely to at least have this as a fantasy once in a while, and if she’s telling you about it, GREAT NEWS: It means you’ve done a GREAT JOB of creating a relationship where your woman feels comfortable sharing the full range of her sexual desires with you.

Here’s one reader who deserves credit for creating that kind of relationship with his woman:

Hey Alex,
Just had my girl tell me that she had a really sexual dream of being with
two guys for the first time. She said it was real hot. We’ve had threesomes
with girls before, but not a guy.
Alex I’m totally uncomfortable and would NOT want to do this with her. It
may be hot to think about as a fantasy but god I wouldn’t want that to
happen. I have anxiety about what things that could lead to. BUT I also
know I shouldn’t ever judge a women’s fantasy. I know the reason she felt
okay telling me is that I’ve created a safe relationship where she can let
her dirtiest fantasies out.
But what now? She asked if I’d ever be comfortable with that. I told her it
was hot and that I wasn’t sure, maybe, but who knows how it’d be in real
life.
How do I tell her it’s not something I would be okay with, without making
her feel like she can’t express her inner dirty desires to me? This has
made me feeling real insecure for some reason (and I’m normally very secure
with sexuality and exploring things)

Thanks for the advice

I’m going to go into some detail here, but the big-picture, important advice that you NEED TO GET in this situation comes from that wise sage, Butthead: “Settle down, Beavis.”

Obviously this situation is causing you some anxiety, and most men would certainly feel the same way. So let’s dig in…

First, take a deep breath and fill up with all the good news here:

1) You’ve got a woman so sexually open with you that she’s willing to invite other women into your bed. Only a small percentage of men manage this despite the fact that the vast majority of women have bisexual fantasies and many (not all, obviously!) secretly wish their man would take charge and make it happen.

2) You’ve got her so impressed by your own level of sexual confidence that she’s unafraid to bring up the most taboo subject of all to a man: inviting another MAN into your bed.
That’s a huge vote of confidence in your confidence!

3) You didn’t freak out and shut her down and make her feel bad, wrong, or slut-shame her for having a fantasy.

In other words, you are the real deal my friend. A confident man, and obviously a great lover for your woman. So…

YOU DON’T NEED TO APOLOGIZE FOR BEING A HUMAN.

To the degree that you are down on yourself for being a bit freaked out about another man entering your woman’s holiest of holies, you feel a sense of shame. And shame is the enemy here.

But after all, she’s confident enough to bring other attractive women in, so you have some evidence to back up your shame around your discomfort which is why you’re talking to me about this instead of her.

Now, remember Butthead’s wisdom? Settle down, have courage, and here’s a step-by-step on how to handle this:

1) Great news. You already did the first thing right! But for all the guys following along it’s: Do NOT shame her for her desires.

Women, much like men, turn out to be human. And part of the human condition is having all sorts of deep, powerful, and often really kinky sexual desires and cravings.

2) Don’t assume that just because she has a fantasy, that she NEEDS to (or even WANTS to) live it out in real life.

I have had many fantasies about fighting a dual with razor-sharp swords with some bad guy that is terrorizing a group of damsels in distress. In my fantasy, by the way, I always win with stunning skill and grace.

Do I really want a guy swinging sharpened steel at me? Hell no.

Sexually speaking, most men, myself included, have indulged in fantasies ranging from the immoral to the absolutely illegal, and most of us don’t want to act them in real life, and we certainly don’t NEED to act them out in real life.

Now, in your case, it sounds like your girlfriend wants to try this out in real life. But I assure you, she doesn’t NEED to, and if you stay cool, she’s not going to be disappointed, leave, cheat, think you’re a big pussy, or anything like that.

(And you have my personal guarantee on that) because…

3) You can still enjoy this kind of thing as a fantasy.

If she wants to play, then PLAY.

You can also become different men for her by taking on different persona’s while sexing her. Try tying her wrists and blind-folding her and then having a large group of very different men take turns having their way with her (all of them actually you, of course).

I’m pretty sure she’ll love it and almost certainly would NOT love having a train run on her in real life. Some things are just better in fantasy, like my sword fight.

But what if she wants more?

4) Look, first of all, before you can have a clean conversation with her about it, you’ve got to get it clean with YOUR SELF.

Why aren’t you okay with bringing in another man?

There’s a biological imperative wired into your male DNA that no other man can touch your woman?

You’re afraid of losing her?

You’re afraid he’ll have a bigger dick? A harder dick? Fuck her harder? That she’ll like it better and fantasize about him afterwards?

That another man in the room will be so anxiety producing that you won’t be able to get it up and you’ll stand their helplessly with your limp penis in your hand while the guy you brought home together pounds your woman into a frenzy of animalistic orgasms?

Sorry, I know it’s tough to think about, but all of us men have this wiring, and to the degree that we hide from it, it controls us as shame.

But to the degree that you can look at and say, “Yep, here’s where my fear and discomfort are, and I’m cool with that. I’m perfect as I am, it’s okay to be a human with human fears.” Then you are the master. You know your limits (bullets won’t bounce off your chest like superman either), and that’s okay.

Once you can be okay with your self and not feel shame around it, you can have a matter-of-fact conversation with your girl and explain what you are willing… and what you are NOT willing to do in comfortable way.

When you both have an understanding of where your fears come from, and recognize your desire to grow past your fears (which does not necessarily mean that you will EVER want to bring in another guy), then she won’t want to bring a guy in either.

She may still fantasize about it and desire it, but she won’t want to do it in real life because she’ll be clear that she’s got the better end of the deal already. She’ll respect your limits without feeling like she’s giving anything up.

Some day, perhaps because of her clear choice to respect your limits as a man, and your own desire to face your fears, you both might cross that line together. Or maybe you won’t. The mature thing for your relationship is that you’re both okay with not knowing the answer to that question.

5) But what about the fact that she’s bringing in women? Isn’t it unfair?

First of all, men and women are different. Women’s deep insecurities lie in different locations and there are differences in the way we are biologically wired.

That’s even more true of us as individuals. Some folks are just more comfortable as swingers. Just because she’s wired to be okay with it, doesn’t mean that you have to be, and vice-versa.

Second, and this really is important, though you didn’t mention it, I’d wager quite a bit of cash that your girl likes girls.

Which is to say, you’re BOTH enjoying bringing that girl in and you are sharing her together.

And I’m also willing to wager a bunch of cash that YOU are not bisexual, and you don’t like boys (sexually). So if you brought a guy in, you would not be sharing him together.

Now, do these steps in order and you’re fine. Do these in reverse order and logically explain to her that two dudes is bad and two girls is good, and you will make her feel judged.

But if you do these in order, and do YOUR WORK FIRST, and get clear, COMFORTABLE, and unafraid and unashamed of being a human with human limitations, then she’ll completely understand this conversation.

And lastly, I gotta put in a shameless pitch here because cock-confidence really is so relevant to this conversation, and because it’s brand new and I’m just super proud of it.

If you have anxiety around the idea of your woman being with other men (especially if you find yourself wondering about her ex-boyfriends). If you ever wonder if she wishes you were bigger, harder, thicker, longer, longer-lasting, and you’ve got some inner issues with your cock-confidence…Then your whole life is going to be a whole lot better, more relaxed, confident, and happier if you watch this video and grab your copy of Unleash The Beast. You’ll never have to wonder again if your woman secretly wishes for some well-hung ex or a guy who can do her better than you.

If you’re on the fence, do it for her. She deserves the confident man that is locked up inside of you.