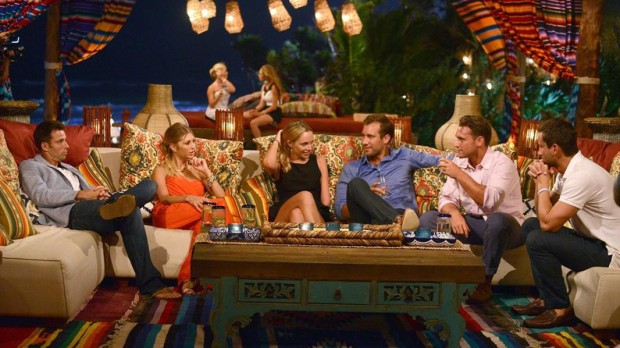 Bachelor In Paradise: Love Is Not In The Air

It’s that time of the week, ladies and gents. The time where people ask themselves the universal, soul searching, deep-hearted question, “What is love?” Baby, prepared to be hurt− much, much more.

It’s round two of Bachelor In Paradise, and contestants are starting to kick back and relax a little less, and wipe away their tears a little more. But before we get into the heartbroken details, let us take a moment to celebrate the magic of true love. At the beginning of the episode Chris Harrison makes an important announcement: Michelle Kujawa, did in fact, find love.

During some off-camera time, Michelle Kujawa and Crew Member Ryan Putz were discovered as more than just friends. And to prove to Michelle that Ryan really did care for her, he jumped off her 25-foot balcony (in fear of losing his job) and broke his legs when a producer came knocking on her door while they were probably getting a little too close for comfort. Now, if that isn’t true love, folks, then I don’t know what is.

I think the biggest lesson to take from this episode is that no, really means no. Poor Elise must have grown up with a wonderful childhood filled with the word yes, because she has a difficult time understanding that Dylan does not want to continue growing their non-existent relationship. Either that, or she’s never seen a dictionary. Marcus and Lacy are inseparable during the episode, making Rob feel a little left out from the sexy couple. Clare and Chris Bukowski enjoy a nice pre-scripted conversation about how Chris really wants to find love, and then Chris and Elise make out in the ocean a little bit later.

Clare started to worry if she would find a connection with anybody on the show, but then Zack Kalter showed up, and she had no problem admitting she “felt his connection in the ocean”. TMI Clare.

Later Marcus and Marquel find a letter addressed to Ben from a girl named Lindsay who said Ben is, “The only one that [she’s] been waiting for.” So, the two confront Ben, who admits he just wanted to experience the show. Michelle partakes in a melodramatic tear-fest, and Clare makes a groundbreaking question, “Is anybody here for love?” There’s your tagline.

At the Rose Ceremony, Elise asks Dylan to accept her rose, only to be surprised that, oh right, no means no Elise. Like Dylan told her earlier in the episode, “No Elise, I cannot accept your rose.” But instead of simply selecting a new Bachelor to accept her rose, Elise attempts a new approach. Cue Elise’s empowering speech for womankind:

Dylan ends up leaving. I don’t blame him.We have another crazy coconut on the lose…