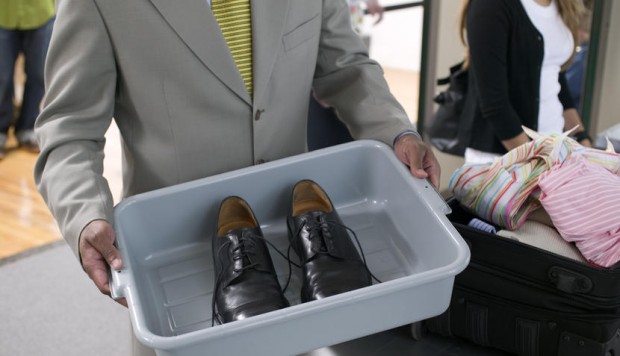 I travel for work and fly a lot. I’m tired of dealing with the hassle of taking my shoes off and on all the time, but don’t want to travel in sneakers.  What’s a good business shoe that won’t get ruined, is easy to deal with, and yet  still looks nice enough for the office?

Yeah, it’s great to want to look nice when you’re flying, whether you need to do so  for work or not. But more than one pair of wingtips has been ruined by the tiny  space on the average airplane, and more than one person has been enraged waiting  for that guy to remove them for airport security. I always travel in a pair of black or  brown Chelsea boots (or ankle boots, if you will), no matter what else I’m wearing.  They compliment everything, from jeans to chinos to suit pants. And a nice shine  will have them looking as office-ready as your faithful cap toes. In fact, with the  right pants length, they won’t look like boots at all. Plus, they slip on and off quickly  with no hassle, so you can avoid the eye rolling from the people behind you in the  security line.