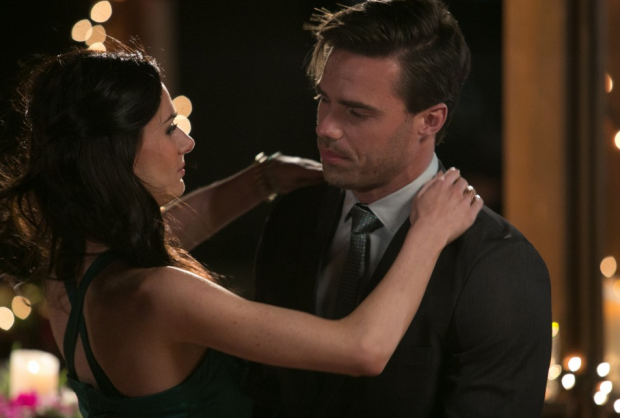 The Bachelor: Should I Stay, Or Should I Go?

Welcome to Toronto, where we like to make our Bachelors and Bachelorettes feel really, really special. First, we take them to stay at hotels in the not-so-nicest areas of the city, and then we take them to make out in theme park automobiles. Classy, if I dare say so myself.

But it doesn’t stop there. Tim knows how to make a gal feel even more special.

Surprise Timmy, Natalie is back! That look on your face was just too nice for words (literally, try saying something). So Natalie realized she made a mistake and decided to come back for some closure, or maybe a second chance at an opening?

But let’s do a little rewind. Tim takes April on a date motorcycling across the city, and then they play a game of pool. April makes a bet: if she wins she gets to drive the motorcycle, and if Tim wins he gets a kiss (typical). So Tim wins because April says she “let” him win. Someone’s eager for a kiss…

Speaking about kissing, let’s take a look at that group date. First of all, Tim takes them to Canada’s Wonderland. Really? You could have done anything else, but instead you take them for a trip to Vaughan, Ontario? Anyways, Kaylynn and Timmy get close in a park automobile, kissing in front of the other ladies as they wolf down their Funnel Cakes. I’d want to be sick too Lisa, but it would be difficult to decipher whether it would be from the food or the awkward angle of that kiss.

So, Lisa being typical Lisa sends Kaylynn off into the ladies room bawling her eyes out. “Do you really think that was appropriate? We’re sitting right there, dude,” says Lisa. “Everyone knows what they signed up for,” says Kaylynn. That’s right Kaylynn, they do. So I’d suggest taking your own words and putting a little damper on those crying sessions you seem to consistently have.

Back at the hotel, Dominique knocks on Tim’s door and confesses that it’s her time to leave because she doesn’t feel like he has taken the time to get to know her. Geez Tim, these ladies just can’t decide if they want to stay or if they want to go. I guess that kiss you guys shared just wasn’t good enough for her tastes.