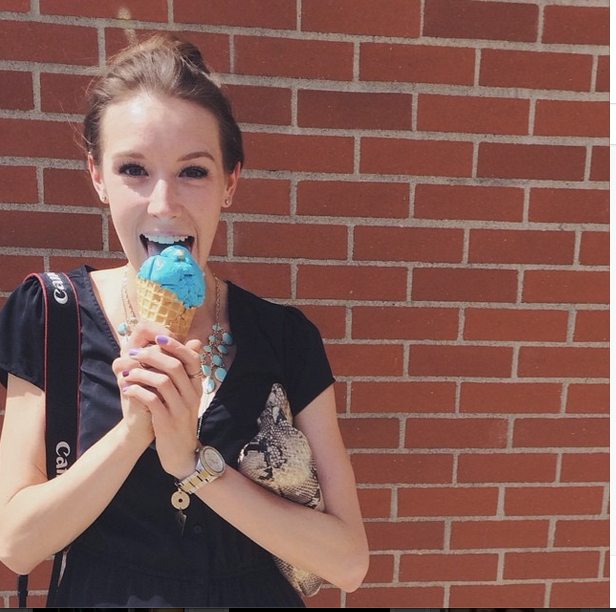 Although she was born in Houston, Texas, Veronica grew up in Calgary, Alberta. As the youngest in her family by 5 and 7 years, she spent the majority of her childhood absorbing, watching and listening – she was a very quiet kid, which would surprise anyone that knows her today.

Veronica has played basketball since she could walk, and used to solely identify herself with her commitment to the game. Although she enjoyed and excelled at basketball – playing at a club, city and provincial level – she never felt destined in her chosen sport. In her final year of high school, she decided to be the ultimate multi-tasker, and toned down her basketball schedule to become involved with the school paper, theatre, dance, and run the broadcast of her school’s morning news. She was good at sports, and naturally athletic– but she loved the creative side of things and the challenges they presented her. Veronica fell in love with writing; it was something she felt passionate and connected to, and to her, it didn’t feel like work.

She went on to study journalism at Mount Royal University – which allowed her to gain invaluable writing experience with the local magazine, the Calgary Journal. In her first year as a staff writer, she made two cover stories, and was nominated for numerous profile awards. She was awarded scholarships for her commitment to the journalism program, and was sent to the United Kingdom to study abroad in her third year. Abroad, she studied magazine production intensively, and in her return to Calgary she was offered the opportunity of a lifetime – to team up with a young entrepreneur to create Calgary’s newest lifestyle magazine. At 22, she had her dream job: Editor in Chief.

What Veronica looks for in a man is somebody with self worth and confidence – not cockiness! She is attracted to someone who is forging his own path and is passionate about something. She wants somebody she can learn from, and bounce ideas off of. Somebody who is engaging and pays attention to detail, but can also kick back with some pizza and watch a Harry Potter marathon in silence.

My ideal first date would be: Something spur of the moment and unexpected, like bumping into someone on a Sunday morning and spending the entire afternoon with them. That way it’s natural, not forced.

People say that I am: Approachable, and more spiritual than you would think. I’m still not sure if that’s a compliment or not…

My ideal partner is: Someone who has their own personal goals, so that we can support each other in reaching them. I also love people who are quirky, sarcastic, and have a bit of a “bad boy” past. It builds character if you’ve made mistakes before.

Dating deal breakers: I can be a little clumsy. If you can’t laugh with me about the sauce I’ll probably spill on my shirt, then see ya later. Also, people who are rude to servers.

A talent that may surprise you: I can probably rap any 90’s rap song you throw at me. It won’t be good, but I’ll know all the words.

Three artists you’ll find on my iPod: The Notorious BIG, Jack White (and any of his bands), Flume

My dream vacation: London, it’s my favourite city in the entire world – next to Calgary, of course!

On weekends you’ll find me: Working in a coffee shop downtown during the day, drinking dark beers with my best friends at pubs at night, and eating brunch in the morning somewhere with my roommate or someone in my family

What I put on my burger: Everything – but if there’s process cheese I’ll pass, it freaks me out. Also lots of hot sauce!

I was most impressed on a date when he: Asked for extra napkins because “I’m a spiller.” I thought it was funny, cute and made me feel comfortable. Plus I actually needed the napkins.

In high school I was: A serious basketball player, but I got along with everyone, not just the kids who played sports. I felt more connected to the kids who would do drama or theatre, and I didn’t decide to tap into my creative side until after high school.

My guilty indulgence is: Peanut butter. I’ll spread it on everything I can.

In my past life I was: Probably some sort of gypsy fortune-teller. I’m really into horoscopes, long skirts and jewellery.

In my next life I’ll be: A wise, elderly author who writes fantasy novels from a cozy cabin in the woods.

If my life were a genre of movie it would be: A comedy, without a doubt. Life is funny.

The actor that should play my life story is: I’ve been told I look like Audrey Hepburn, but I think she’s too graceful to play me. Mila Kunis could be a good one. I’m a bit of a tomboy.

To relieve stress I: Go for a run, and listen to lyric-heavy rap music. Works every time.

If I played hooky I’d: I never play hooky because I love what I do, I technically never get a day off – but I don’t ever work a day either. It’s constant and fulfilling.

If I found a genie in a bottle my three wishes would be:
1. To always be doing something that makes me happy, and to continue to be lucky enough to work in the field that I love.
2.Health and happiness for my family and friends
3. At the risk of sounding materialistic – an all black Range Rover with black tint and black rims, with an amazing sound system, with free gas…

Want to suggest or even be one of “Calgary’s Most Eligible Bachelors”? Email menandwomen@eligiblemagazine.com with your suggestion.

FOLLOW US ON INSTAGRAM TO SEE NEW BACHELORS AND BACHELORETTES WEEKLY AND BEHIND THE SCENES PHOTOS! (eligiblezinesmosteligible)