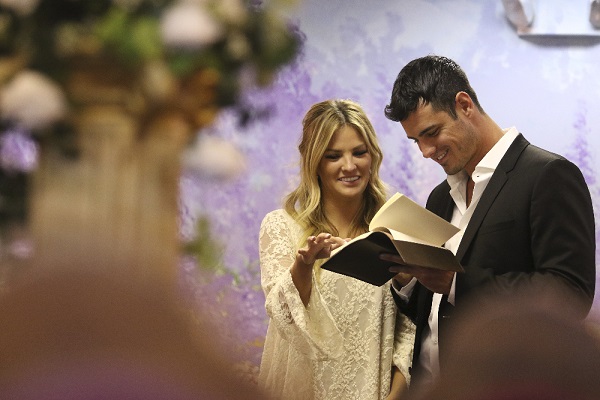 The Bachelor: What Happens In Vegas

Last night, Caila addressed the big issue on everyone’s mind: which one is Haley and which is Emily? Fans are given a lot of help with the duo’s shared occupation of “twins.” Can we not settle this? More on that later. This week, the women flew to the land famous for Elvis, casinos, and well thought out weddings. You know what they say. What happens in Vegas stays in Vegas–unless you’re on The Bachelor. The first one on one date went to Jo Jo, who was picked up on a helicopter pad. The aircraft made a big entrance by blowing over an ill-placed table for two. Jo Jo and Ben crouched behind the fallen furniture and kissed…while all the other women in a nearby window looked on. Come on, Ben. Jo Jo later came out with the *shocking,* never-before-heard confession that she has a hard time “opening up.” At dinner, Ben mentioned that he has so many “moments” when he’s attracted to Jo Jo. She got the rose, and the two locked lips under a romantic sky of fireworks. Back at the hotel, a jealous Olivia bluntly observed that they were probably “making out” at that moment. Good guess.

The group date headed to a theatre, where ventriloquist Terry Fator informed them that they would be performing in a talent show. Olivia found a showgirl outfit and promised us a dance with some “Olivia moves.” Just in case we weren’t sure she’s the new show villain, she dressed in red. The twins paired up to perform some Riverdance tapping and Jubilee played the cello. The serious talent ended then, and the rest was pretty much clowns and other circus-variety acts. Kindergarten teacher Lauren H. let out her inner kid and dressed up like a chicken to perform a bachelorized edition of “Old Ben Higgins Had a Farm.” Like some form of a frightening jack-in-the-box, a reliably open mouthed Olivia popped out of a cake and…danced? We’re not sure, see the video below and you can be the judge. There was a lot of shimmying and foot kicks. After Olivia hugged Ben post-performance, she fled to the bathroom in humiliation. This would be more sad if we weren’t distracted by seeing someone weep in a superhero cape. She claimed Ben was “mortified” by her performance. To be fair, he did have his face buried in his hands. Ouch.

Later that night, Ben remarked to us that Caila usually comes across as shy…until they’re kissing. At that point, Ben’s inner poet came out. Apparently she’s a “tigress” and a “sex panther.” Easy on the National Geographic references, Ben. She’s a woman, too. Lauren’s animal costume also won her points with the bachelor. “You were the cutest chicken today.” Ben snagged the ventriloquist puppet and it became a threesome of flirting. Lauren expressed surprise that she got to hang out with both Ben and little Ben. That naming game could be taken more than one way, Lauren. Caila summed up Olivia’s actions that night with the phrase, “digging her own grave.” The grave digger delivered and lost her cool with our guy. As a flood of her insecurities came out–just like last week–Ben understandably looked a little lost for words. He won points though for the most adorable lie. “You weren’t terrible at all!” But Olivia could definitely tell something had changed when they parted without a kiss. Finally, twin Emily (or was it Haley?) snagged some of Ben’s time. Just as she was walking him through the sad tale of leaving her dog at home, the grave digger returned again. She told Ben she wanted to “start over.” They kissed, but it was more like a comforting peck. The kind you get from a distant, but polite elderly relative. Eek.

Becca scored the next one on one date and was sent a very Vegas outfit. A wedding dress. Jubilee mentioned that virginal white was a perfect pick for the famously abstinent contestant. A tuxedo clad Ben knelt on one knee in front of Becca and asked her, “Will you marry–*long pause*–other people with me?” Ben actually got ordained to perform marriages. *fans self.* In typical Vegas fashion, the chapel churned out multiple weddings in the space of a few hours. Ben told Becca he had saved this date for her. He knew she would be supportive. That night, the pair ventured to a museum, where old refurbished neon signs took the place of candles. Wondering about Becca, Ben asked us, “Can she love, can she feel?” Um, what? Ben bravely brought up Becca’s virgin status. Her reference to values and wanting to wait for love revealed to Ben her attractive trait of “commitment. “ After, the two exchanged an interesting set of vows. The bachelor smoothly side-stepped the show’s lack of monogamy by making promises like, “I vow to look you in the eye when we’re talking.” We could practically hear the far off sound of castoff Lace crying in envy. It’s all in the eye contact.

The next date proved that three is definitely a crowd. Yes, Ben decided to go on a date with the twins to pick between the two. Since Vegas was their hometown, he even met their mom. After having had a few chats with Ben, Emily confessed to us, “I need Haley to go home.” The well meaning mom also threw Haley under the bus by calling Emily the more “dominant” twin. Predictably, Haley was sent packing. As both twins cried, we wondered how the show could go on without fans constantly being confused. That night, Caila was on fire with more observations. Stunning in silver, Olivia was dubbed “the shark.” Olivia told Ben she was “falling hard” for him and he responded with a meaningful silence. Later though, the shark baited Jo Jo by claiming her feelings “were reciprocated.” Jubilee repeated to Ben again that she’s “complicated,” and their hug was admittedly awkward. At the rose ceremony, Olivia’s name was called last for the second week in a row. Unemployed Rachel and Group Chat Amber both went home.

The contestant numbers are going down fast, and the passion is turning up. The stakes went up in Vegas, so tune in next Monday for a new episode! There’s definitely more sharks and drama lurking in The Bachelor waters.