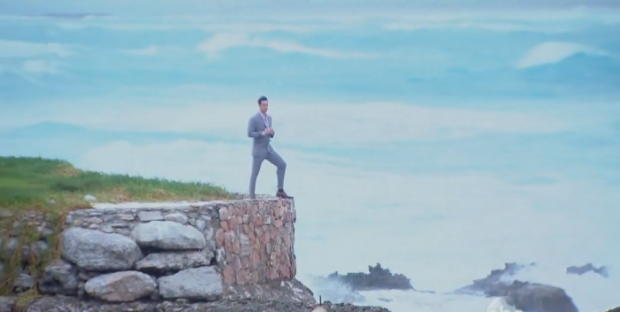 The Bachelor: Rejection On The Stormy Seas

After last week’s maddening cliffhanger–complete with real cliff scenery spoilers–the ladies’ week in the Bahamas opened on a chilling prospect: Ben could take Olivia’s rose away. This is equivalent to an Olympic athlete having their gold medal revoked, and we’re still cringing over the bloodthirsty “teen mom” comment that started it all. However, we knew it was really serious when Ben pulled Olivia aside and she moved her mouth like a regular human for the span of the entire conversation. Bye, Jaws. Using the ultimate ‘get out of jail free card,’ Olivia claimed there was a target on her back from night one. This line historically leaves The Bachelor men reeling in confusion and clears up absolutely nothing. Ben’s all with keeping tradition. In a very strategic move, he then confronted the group stating he hated all the fighting and walked away.

At the rose ceremony, we said goodbye to the show’s rapidly dying breed: a brunette. What was her name again? Right, Jennifer. The one no one recognizes. Where was your screentime, Jen? Leah, (a blonde, but also who we completely forgot about) complained that Caila got a second one-on-one with Ben when she had yet to go on one herself. Leah claimed that the universe had brought her and Ben together, adorably overlooking boring things like facts. You know, like the fact it was the show that brought them together. But can we blame Ben for his choice of a date? Poor Caila is the last brunette standing in a sea of blondes. She could probably use some reassurance that our guy isn’t only looking for a Goldilocks.

Ben shook things up by taking Caila to the sea via boat. RIP, random aircraft dates. He rightly recognized that their first “ride along” date came with a weird group package deal. Not to mention a price tag deal of about zero dollars. This time around, Ben was determined to make it more intimate. So naturally, they went deep sea fishing. *Swoon.* Wearing a waist harness that looked pretty much like a chastity belt, Ben guided Caila’s hips on the finer points of hooking a major catch. That night, Ben was determined to figure out what’s “behind her smile” and see the “layers.” Caila’s response was awkward and confusing. She felt she couldn’t share her inner thoughts but felt like she loved him, but also feared she can’t love and would break his heart. What? Too many layers, Caila.

Later though, she claimed that Ben “understood” her. Apparently this made everything clear to Ben. When he told us this was one of the best dates of his life, we gave up on understanding this oddly layered couple. Like the sea, their relationship apparently has unknown depths.

Speaking of Goldilocks earlier, emotions ran from extremes of hot to cold on the group date. Let’s be fair and realize that there’s always that mid-competition period where everyone is absolutely miserable. This date delivered on that recurring Bachelor plot point, and given the scenario, we really shouldn’t be surprised. The blonde brigade were stuck on a boat together in possibly shark infested waters. As it turns out, it was infested with swimming pigs the ladies later had to deal with on the shoreline. These romantic creatures failed to lighten the mood. According to Ben though, the women had a “blast” while screaming and running in terror. The date only went down from there, with quiet frontrunner Lauren B snagging Ben for a one on one ocean chat. Ben didn’t understand what was up with the women’s moodiness and an ignored Lauren resentfully labeled herself a “group date groupie.” Accurate, but we’re pretty sure everyone was a groupie next to Ben and Lauren B’s undeniable chemistry.

That night, most individual chats ended up with a therapist to patient vibe, as the bachelor reassured crying women that each and every one of them were unique snowflakes he adored. In a bold move, Leah plotted to bring Lauren B down with a piece of unfounded fiction, as far as we can tell. She told Ben that Lauren B wasn’t being real with him, which of course started another crying fest when news of the ‘anonymous’ tip got back to the group. Leah scored zero points on stealth and may as well have drawn an arrow pointing to her face. In an unsurprising move, the trash talker was sent packing, though Ben said he would “never forget” her. Yes, we’ll all remember this season standout. The next date was the dreaded two on one with Emily and Olivia. Since Emily’s twin went home, she’s been a crusader for justice against drama starters. With a special hate reserved for Olivia’s big mouth and allegedly bad breath, the two’s faceoff promised to be painful. What was also painful was the weather, proof that the Bahamas is not all sunshine and rainbows. With angsty sea spray and cold beach winds to match the mood, Olivia boldly told Ben she loved him as she gave an encyclopaedia-sized list of her gifts and talents. Although she was confident, the big twist came when a defeated Emily–attacked by hair constantly blowing in her face–got the coveted rose. Our beloved Olivia went home, and we wondered how Ben could possibly give up this self-proclaimed “deep intellectual.” The send off was the one bright spot for contestants in an otherwise bleak day. Meanwhile, Ben felt so drained after the week’s drama that he canceled the cocktail party. We were more focused on the misleadingly small ‘cliff’ he brooded on while doubting the existence of love. In a not-so-shocking twist, Lauren H was denied her rose. We sympathized with her on the limo ride out as she cried, “I don’t really know what he wants.” Lauren, after that confusing date of mixed messages with Caila, neither do we.

Next week promises more tears and heartbreak, Bachelor Nation! The final bouquet of roses can only bloom for a select few, so tune in on Monday to find out which relationships are truly flourishing. The fight for our tortured bachelor’s heart is just getting started!