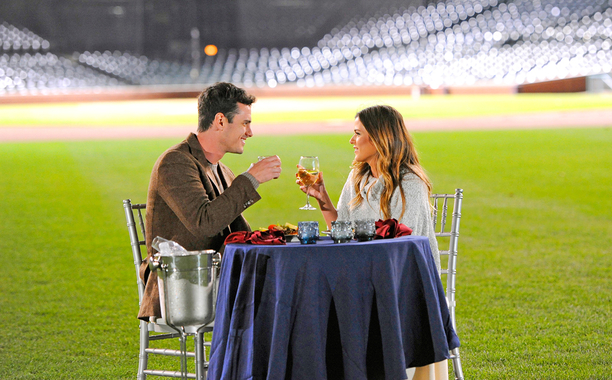 The Bachelor: The Young and the Roseless

This week was all about Ben’s hometown of Warsaw, Indiana, a largely wifi-less piece of America that gave the Bachelor his strong emotional side. Ben pulled up in a boat, and Caila was so eager she nearly dragged it to the dock herself. The women were adorably warned not to spy on our guy’s still-smitten parents, whose marriage apparently has a healthy physical side. Possibly TMI, but that’s serious relationship goals. The real question was though, where was Chris Harrison? The longtime host has been taking serious MIA time this season, and this week was no exception–rather than a delivered date card, Lauren got asked out for the one on one by Ben in person. Naturally, this wasn’t at all awkward for the other women to see.

Heading to his childhood movie theatre with Lauren, Ben recounted the tale of his first kiss in grade seven. We can rest easy that this amazing Bachelor is human after all, as he recalled confessing to his more experienced middle school date–with already one kiss behind her–that he didn’t know how to do it. “And then she kissed me…but she had to laugh at me first.” This pickup truck outing was, in a word, adorable. The next stop was Ben’s past youth club, where the the community focuses on giving kids an after-school program. While Lauren skipped rope, she described feeling “like a giant kid.” Warsaw’s young basketball star Ronnie–the bleachest blonde kid you’ll ever see–scored a half court shot to a gymnasium of kids chanting “KISS KISS KISS.” The couple kept it PG with a quick peck. Of course, some Indiana Pacers showed up, revealing a seal-the-deal detail about Lauren–she’s a lifelong basketball fan. Ben further snagged our hearts by comforting a crying kid in the corner. Dad material, was Lauren’s interpretation. By night’s end, Ben brought up past villain Leah’s accusations about Lauren’s fakeness. Breaking with show tradition, the two jumped easily back onto the same page with Lauren’s fearless tactic of clarity in addressing the issue head on. There were no ambiguous ‘layers’ in her answer to sift through. Take notes, Caila. Lauren was a ray of onscreen sunshine as she admitted to us that she’s in love, visible proof that the bride-to-be glow is an actual thing.

JoJo went into her one on one date hyper aware of the serious threat of Lauren. Ben took her to the Chicago Cubs Wrigley Field stadium. So. many. sports. The pair played a game of baseball and managed to crush the non-existent competition. Back at the house, the women got deep by describing all the emotional whirlwinds as a “rollercoaster.” Ben told us that he feels most like “himself” around JoJo, but she wasn’t quite ready yet to admit strong feelings. The Bachelor wouldn’t be The Bachelor without trust issues in spades. Emily wept when she found out about her upcoming one on one, while Ben and JoJo’s evening ended on an honest but uneasy note of uncertainty about the future. Can Ben ever really earn JoJo’s trust? Just when it looked like a definite no, JoJo suddenly “threw away” her uncertainty and told us she wanted to give herself to Ben. We’re not quite sure where that came from.

On the three on one, the women were once again stuck together on a love boat. Once on shore, Amanda worried that the date was too focused on flying kites and finally got the chance to dish to more Ben on her kids. Becca was a straight shooter with Ben and begged him, “don’t blindside me.” Uh oh. Foreshadowing? Caila worried if her family could be enough for Ben in light of her own lack of hometown roots, but promised our grounded guy that she was just adaptable “moss” in search of the perfect “tree.” Amanda got the night’s rose, spiralling Becca into tears and plummeting the house’s already low mood. If only the women could see the following date they were missing out on–McDonald’s drive-thru. As in, Amanda and Ben worked behind the drive-thru window taking orders. Caila’s cheap hot tub store outing may just have been surpassed with this blatant product placement. Amanda met some townsfolk, and the date ended at a carnival as the pair made out for a crowd atop a ferris wheel. In an unforeseen move, 23-year-old Emily was the first date to meet the bachelor’s parents. By the end of the anticipated sit down chat, one thing was clear to us: This self-proclaimed “average” girl really likes movies. Basically “Netflix and chill and babies” is her idealized life mantra. As much as we may empathize, Mama and Papa Higgins said it all with strained but polite silence. Caila delivered on her observational skills by comparing Emily to a “puppy” who thrives on excitement. But is this youngest contestant thoroughly house trained?  According to Mama Higgins, no. That affirmation was all Ben needed to send the final half of the “fun” twin package home.

Just as Ben was contemplating the difficult rose ceremony ahead, Chris swooped in with some of his classically generalized advice about how Ben needed to be sure there was potential to fall in love with whoever stayed. *Rolls eyes.* Thank you for that deep insight, Chris. We pretty much knew that Lauren and JoJo were sure things based on their stellar dates, but the others’ fate was less certain.  It looks like Ben may be for looking for some healthy tree moss after all, because Caila survived the chopping axe. As Becca walked to the limo, she pulled her hand away from Ben’s and asked, “Why did you do that?” The dejected Bachelor hunched down on a bench as we said goodbye to this final remnant of Chris Soule’s castoff baggage.

We’re down to the final three, Bachelor Nation! Hometown visits are coming next week, so tune in on Monday to see who feels the thorns of the next rose ceremony! The countdown is on.