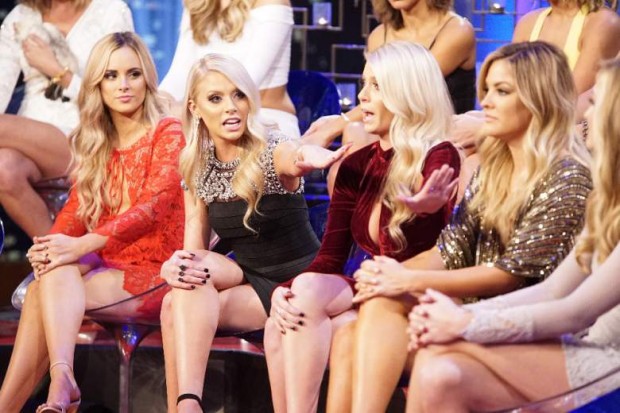 The Bachelor: Dishing It Out At The Women Tell All

It’s almost the end, Bachelor Nation! After Ben botched the Fantasy Suite dates last week by telling both Jojo and Lauren that he loves them, the Women Tell All was sure to be full of castoffs ready to dish details on the house politics and our confused Bachelor. First though, Ben and Chris dropped in on Bachelor slumber parties and Fantasy Leagues, where fans showcased some serious scoreboards. Among the returning guests, viewers were treated to a cameo appearance of episode 1 “Sheila,” who happens to be a chicken. Diving in, Chris asked the women about night one. Caila was incredibly generous by starting out with only good things to say about the man who blindsided her with that painful rejection, but by the time Ben popped onstage, her carefree vibe changed. More on that later. Oh, and Sheila flew out of Lace’s arms and offstage. Meanwhile, Leah came clean about her infamous lie about Lauren’s fakeness. Sort of. According to her, it was pretty true, but the other women weren’t having it.

By the time Sheila was back and clucking onstage, it was time to move on to Jubilee. She chalked up her lack of popularity to being “different” and accused the other women of back talking her. Meanwhile, Jami and Amber teamed up to accuse Jubilee of making racially directed comments towards them. Shushanna tried to chime in with support, but we were distracted by her amazing waterfall of cascading curls. Jubilee finally confessed that her words could be offensive and apologized. Put in the hot seat, Jubilee moved on to her relationship with Ben. With a strong bond seemingly on track, the contestant claimed to be caught up in the “unreality” of competing with so many others. Lace’s time in the hot seat showed a much more composed woman than we remembered. Just as she vowed to swear off the word “crazy” for good, an audience fan leaped on screen. Throwing off his shirt, he declared Lace “crazy beautiful” and revealed a large tattoo on his side of her smiling face. Commitment goals, or scary? You be the judge.

Finally, the moment we all waited for arrived as Olivia took the hot seat. Olivia said she would “own up” to having been a little insensitive at times, but the women’s faces behind her told us what they really thought about that. Amanda finally confronted Olivia about her “teen mom” comment and others made about her kids. Emily or Hailey – yeah, we still can’t tell them apart – delivered the usual sass and pointed to a slut-shaming comment Olivia had directed at…Emily or Hailey. Meanwhile, forgettable Jennifer piped up and told Olivia, “We like to read books and talk smart things, too.” Olivia broke down towards the end, calling herself an introvert with a hard past being on the receiving end of bullying. She brought up the reality of post-Bachelor troubles, handing over her flooded social media accounts to her sister for self-preservation. This infamous villain ended her screentime to tearfully apologize to Amanda and the other women.

When Caila took the hot seat, she looked pained while watching her Bachelor footage. She confessed that she’s still in love with Ben and wants someone to love her in the way he looks at Jojo and Lauren. Then, our hearts broke for her: “I just miss talking to him.” She got her wish when Ben took the hot seat. Ben explained his strategy of “compartmentalizing” separate relationships. But Caila had a question for Ben. Was it her reluctance to commit that sabotaged their relationship? We got a true politician’s answer along the lines of Ben gaging “progress” of other relationships. So no, that didn’t really clear things up much. Jubilee confronted the Bachelor more bluntly: “You dumped me. Remember that?” Talking it out, she told Ben he had blamed her for their failed relationship. Ben gave the stellar response that he was equally to blame, earning Jubilee’s approval. “That’s all I wanted to hear.” Amanda had only good things to say about Ben, touched when she saw footage of how hard he took their breakup. Becca went a step further by claiming Ben restored her faith in good guys being out there, and Lauren H. wished the final contestant standing a happily ever after. Oh, and Ben shocked everyone by correctly guessing the twin’s names. How, Ben? How?

The Bachelor ended by saying that he’s “more in love” than before, and “I would marry that woman tomorrow if I could.” Chris asked if he could “hold” Ben to that. Hmmm. The women’s overall consensus about Ben? An A+ report card. But before we give this man a superhero cape, we need to see the final rose ceremony. Someone has to end up heartbroken. Will the Bachelor be able to keep his certified seal of approval, or are these grades going down the drain?

Next week’s sneak peek promises to be full of passion and confusion. There are even signs of a bathroom floor heart to heart. With the remaining women oblivious to Ben’s shared feelings, how will this end? Lauren or Jojo? Tune in on Monday to watch the final contestant countdown, Bachelor Nation!