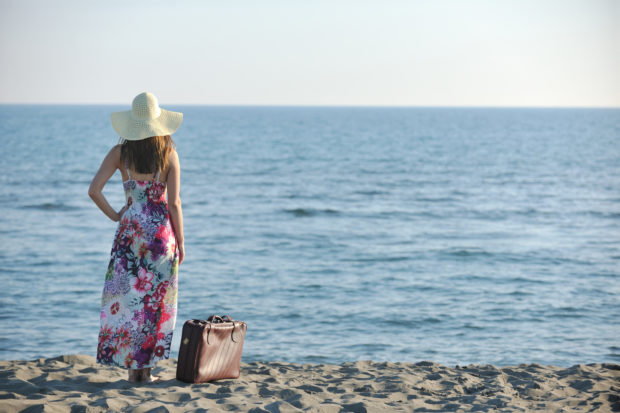 Saying goodbye has never been something I was good at.  Yes, it’s hard for everyone.  I know.  But…dare I say it?  I may just take goodbyes harder than the next person.  I dread them.  I have nightmares about them.  I hate them and feel their pain before they even happen. Perhaps it’s my abandonment issues…my “Daddy issues”…or just my issues in general.  What I’ve always known is that if I could avoid a goodbye, I could avoid what I now know to be inevitable….pain.

For 26 years, goodbyes haunted me.

All the friends I thought I’d have in my life forever as a kid, slowly dropped out of my life one by one.  People grow apart, it’s a part of life; but I couldn’t ever fully accept it when someone was in my life one minute and not the next.  Throughout the years, I’d make new close friends just to lose them to relocation, boyfriends, babies, marriage, etc.  You know how it goes.  Even worse, I’d repeatedly fall in love with The Guy Who Always Leaves When Things Get Tough.  It probably sounds dramatic, but my life seemed like a movie montage of epic exits made by people I never thought would leave.

How could I stop this cycle?  How could I tolerate the process?  Or at the very least, become strong enough to handle it better?

They say you have to face your fears to truly conquer them once and for all.  I agree with this sentiment (from the omnipotent they) and chose to follow this strategy.  Eleven months ago, I said the biggest “Goodbye” of my life to date.

I said goodbye to my home.  Goodbye to my friends and my family.  Goodbye to everything I knew and loved.  This time, I was the one saying goodbye- and in the most grandiose, albeit slightly insane, way.  Part of me (I’ll admit it) thought it would be easier living all on my own far, far away, without anyone entering and exiting my life.  And silly me, that’s how I thought it would actually go.

A year ago, I took a deep breath (okay MANY deep breaths) and said “sayonara” to the United States to travel the world.

The path ahead of me was daunting and full of concepts I had yet to grasp.  One of them being just how much I would have to say “goodbye” and the way these words would change me as a person.  Little did I know when I said that first big “goodbye,” I was welcoming on a list of people, places and things all around the world with which I would fall in love and then have to leave.  Obviously, that’s not what I had in mind.

It felt like a giant slap in the face at first…and then it started to feel liberating.

This path…this pattern…this lifestyle that I chose…it conditioned my mind to expect the goodbyes, and in turn, appreciate the “hello’s” that I used to take for granted, or even avoid.  When you’re traveling and you know your time is limited in a particular place or with a particular person, things quickly get intense and more enriching.

There’s no time to hold back or procrastinate when you’re traveling from place to place.  There’s no time for bullshit.  Anything besides complete sincerity and openness is just a waste of time.  You learn this quick on the road.

You learn to live in the moment and have the deep conversations that may be considered taboo at home.

You learn to express yourself clearly and to appreciate whatever comes out, because you’ve learned to accept and love yourself.

You learn how to take chances and let people in, even when it’s scary.

You learn to go ahead and open doors you know you will have to close, because, in the end you see, every door is worth opening.

In knowing a goodbye is on it’s way, you soak in every last drop of happiness from whatever the source may be that day.

This week, for me, it was a group of British guys who became the three brothers I never had.  We met in Vienna at Hostel Ruthensteiner and became instant best friends, followed by an inability to separate from each other for a week straight.  When it came time to say goodbye, I felt the old familiar twinge of pain.  But then I released it, knowing how lucky I was to have met them and that when the time comes we will have a reunion (with a lot debauchery involved). This week I didn’t just “tolerate the process,” I treasured it.

On this forever changing path, I have had some of the most impactful and enriching connections of my life.  I’ve also done things I never would have done back home (ie. skinny dipping in the Mediterranean Sea).  Experiences have been more intense- jolting my soul back to life over and over again.  Connections run deeper and so do the accompanying conversations.  The world is a brighter, richer place these days and I credit my travels entirely.

This lifestyle of hello and goodbye, change and rearrange, is something of an analogy for life.  Life is ever-changing and we are forced to eventually say goodbye to people, places and things we love all the time.  We know this but we forget to appreciate where we are here and now.

At home in our daily routines, we forget to make the most out of our time with those around us today, assuming we will have many more days- but what if we don’t?  The thing about travel, is that you definitely don’t.

For example, your new close friend/room mate is getting on a train Tuesday, while you’re going the opposite direction Thursday, so you both better get down to business with that bottle of wine and deep talks about life before your time is up.  And that’s just how it goes.  Travelers or not, we all drift along going down our paths.  Traveling just makes the process transparent.

I remember being the person who took saying hello for granted, for fear of rejection or loss later.  I see now that I, subconsciously, closed myself off for years.

Traveling has forced me to crack open and break down the walls, while downsizing my fear of loss.  I see now that you never really lose anyone.  People come and go into your life for a reason.  Whether it’s for five minutes, five days or five decades, and we should treasure it all the same, while trusting that those meant to be in our life will circle back in.

I’ve heard that lessons in life come at you in cycles- you know, until you’ve fully learned and appreciated them.  Now, I see this concept clearer than ever, and can finally say “good bye” to painful goodbyes.  Now, when this word comes out of my mouth it feels only slightly bittersweet mixed with anticipation for the next “hello.”