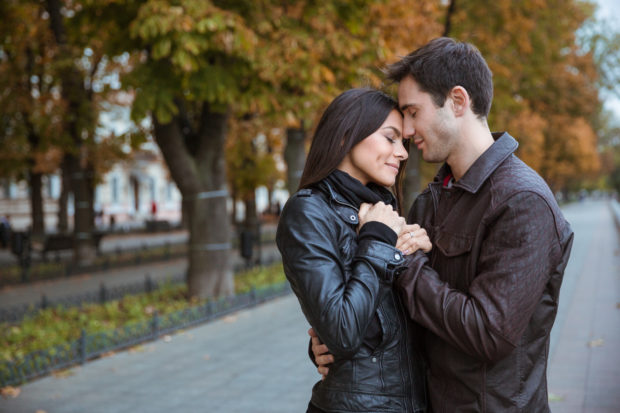 I am happy to say that in just a few days my incredible, amazing, wonderful (and any other adjective that would fit) boyfriend and I will be celebrating our one-year anniversary. To celebrate the milestone, I bought us tickets to the Toronto Raptors home opener, the same place we had our first date. It has been a year that has been filled with a few downs but mostly ups. Incredible trips together, dinners out, talks of our future, and even some room in his closet.

He is someone that I can share all my dreams and fears with. Someone who I can talk openly and honestly with. Someone who supported me through my recent job loss and helped me find the strength to continue to follow my dreams. I could brag about him and our relationship all day long, but instead I thought I would share with you how we got to this point. Just before my boyfriend came into my life, I had given up on the idea of love. I convinced myself that all men were dogs who would use you and then move on to the next best thing. I had a boyfriend who cheated on me, followed by what I thought were promising starts but, it seemed everyone I went out with was a magician who would just disappear. I started to believe that everyone in this world was just looking for the next best thing, while I was here looking for someone to go on picnics, bike rides, and watch sunsets with… I guess I would fall under the hopeless romantic category.

And just when it seemed impossible to find someone willing to commit to two or even *gasp* three dates, my pool was limited. As a public figure and on air personality, I was afraid of this online world. While all of my friends were recounting awkward tinder dates, I was afraid to join this swiping phenomenon. What if someone who watched my show found me? That would be oh so weird. I live my on air life in such a public manner, but I wasn’t willing to put myself out there publicly on an online dating app.

So needless to say it seemed that everything I had been taught in the past didn’t quite seem to work for me. I had tried the hard to get, the don’t rush into anything, the be mysterious. It was getting me nowhere. So instead of continuing to hit my head against a brick wall, I decided to throw out the rule book and, guess what, it worked. So, I decided to share with you a few of the rules I decided not to live by that found me my dream man, and I hope that maybe this can give the hopeless romantic who has been on one too many failed bumble encounters faith that Mr. right is out there. 1. Let a man ask you out on the date. In the past I had always been taught let the man chase you, let him ask you out, let him take care of you. Well a big F that because it wasn’t happening. So I broke that rule. I was the one who approached my boyfriend and told him we should go out. I was also the one who planned the first date. According to him he really liked me taking initiative because it left a mark and set me a part from the tinder matches. So ladies if you want something, go after it. Ask him out. If he says no, well good thing you didn’t waste more time waiting around for him to ask you out.

2. Leave some mystery. In the past I had been told to keep men guessing. Don’t give away all your secrets, and don’t be too available. After I met my boyfriend I just wanted to see him more because we had such a fun time together. Why wouldn’t I want to hang out with someone I had fun with. I am pretty sure we spent 5 out of the next 7 days together. I haven’t stayed in my condo since our first week of dating. It has actually made the relationship stronger because we have gotten to know the other person and not just what they present to us on a date night. We get to see them when they come home from work after a hard day, and we get to be the sounding board when the boss was a dick. It helps speed up the trust in a relationship.

3. Don’t be too honest too fast. Listen I am 27, I know that seems young, but I was past my fun days. I was ready to find a real relationship with real potential and a real future. I figured if my boyfriend wasn’t in to that then I wasn’t going to waste my time or his. If he wanted to sleep around, go right ahead, but it wasn’t going to be with me. I think I told him on date three we weren’t going to sleep together until we were monogamous. Guess what, we were exclusive after about two weeks. We were honest with what we were looking for from the beginning and I think that is so important. If one person is looking for a relationship, and another isn’t then why waste each other’s time? And if you put that out there early on, then you are both on the same page from the beginning.

4. Hide the crazy. Ladies I hate to admit it; but we all have a bit of a crazy side… some of us a lot of a crazy. I don’t blame us ladies, I know it’s the guys that make us this way. They drive us to the point of psycho-ism by ghosting for weeks and then reappearing out of the blue. By reading our texts and not responding, and by keeping a tinder account for way longer than they should. I get it. In the past though I would always try and hide my true feelings. Bite my tongue when something bothered me, and guess where that got me? Walked all over, cheated on, left for someone “better”. With my current boyfriend I decided he was going to accept me for me and if we were going to have a mature relationship, we were going to have to communicate honestly, no matter how crazy I may have sounded. Having found someone who makes me feel comfortable enough I was able to realize that a lot of my issues had to do with being cheated on in the past. Slowly but surely I realized he wasn’t my ex and deserved a clean slate. But hey, if a girl is getting to close and it bothers me, I’ll tell him. If someone I don’t know comments on a Facebook picture, I’ll ask. I know it may seem a little ridiculous, but if we talk about something right away, it doesn’t explode into a full blown world war three later on. It also helps us communicate and get through any concerns or issues.
Couple hugging outdoors

Well, I hope learning from my past mistakes helped you a little, and I hope you will consider throwing out the “rule” book yourself. Because if you are sitting here reading this and wondering how you can be in a year long happy relationship, then I hate to tell you, something isn’t working. And hey, if you can’t be honest, open, and yourself with someone then you probably don’t want to waste your time with them anyway.