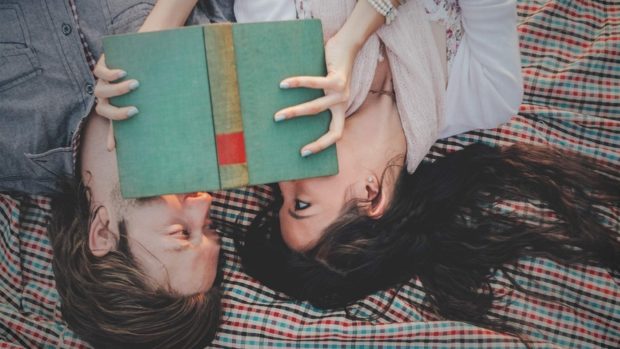 My parents met their freshman year of college. In their day, that was pretty typical.  It was even something of an expectation, especially for women: you go to college, you meet your husband — the pillar of your future.

By the late 80s and early 90s when I was a co-ed, the “MRS” degree was no longer an acceptable goal.  We women were at school to earn our degrees, and ultimately to pursue a career. If we happened to meet Mr. Right while we were there, great. But it was not at the top of our list.

At least not explicitly. The fact that my own parents met in college planted a subconscious seed that I might meet my future husband on campus.  Freshman year, sophomore year, then at last senior year came and went, all without a would-be hubby. Like my classmates, I took part in the dying (or dead) art of dating, went to dinner, formals and movies, and occasionally hooked up. But for me there was no one serious. Though I wasn’t disheartened, in all honesty, I have to admit that deep down, I was keeping an eye out for “the one” between studying and having fun.

Today this comes out as a sort of confession.  A full generation later, expectations have changed, both at home and in the workforce.  Our society’s assumptions about marriage have changed, and we’ve assigned all sorts of narratives — whether true or false —  to the M-word.  Rumor has it that men have it better. That in marriage, women are being ripped off and are trapped, enslaved, or dependent. Today, only 20% of Americans are married by age 29, compared to nearly 60 percent in 1960, according to the Population Reference Bureau.  As Andrew J. Cherlin explains in his book The Marriage-Go-Round: The State of Marriage and the Family in America Today, “Just as the word ‘marriage’ taps a reservoir of positive sentiment in America, so does the phrase ‘individual freedom.’”  He adds that “marriage is still important, but it is now optional: people can start relationships or have children without it.”

The very definition of relationships has morphed. Instead of having “boyfriends” or “girlfriends,” high school kids seem more likely nowadays to be “talking,” “hanging out,” or “spending time” with somebody. And with technology and social media, virtual relationships have exploded into the picture.  A boy in L.A. might find himself “hanging out” or “spending time” by Skype and SnapChat with a girl in Chicago he met at camp over the summer.  How do visions of marriage, or any commitment for that matter, fit in when you’re almost always relating through a screen?

Yet, authors Linda J. Waite and Maggie Gallagher note in their book, The Case for Marriage: Why Married People are Happier, Healthier and Better Off Financially that “In 1992, the number-one aspiration of high-school seniors was ‘having a good marriage and family life,’ and the proportion of seniors calling that goal ‘extremely important’ has actually risen over the last two decades. Only 8 percent of American women consider remaining single an ideal, a proportion that has not changed over the last generation.”

And let’s face it: everybody wants to find love.

If only 8% of women strive for singledom, it follows that at some level, over 90% are at least on the lookout for a partner.  And that this may well begin during the college years — if not sooner.  Decisions and actions are influenced by our goals and wants even when they’re not being actively pursued.

The bottom line: we all have to listen to our hearts. Just because in some circles it is thought of as socially unacceptable, outdated, uncool or un-feminist to be on the lookout for a husband in college, it doesn’t mean you need to subscribe to those views. Just as women got out of the kitchen by not listening to what society told them, so should you allow yourself to keep an eye open for “The One” whenever and wherever you see fit.

RELATED: Finding Your Mate At The Gym I’d bet you a semester’s tuition that making up your mind for yourself regardless of what’s trendy and what’s being touted as “right” will yield the best results, whether or not that means entering college — or any life situation — with the search for a husband on your mind.

So maybe it’s no longer cool or socially acceptable to have the hunt for a husband or partner in mind while going through the college years.  But is there anything wrong with it?

I’d say that if your gut says your undergrad years are not the right time and you have other priorities, go with it.  But if your heart says “look,” you should — no matter what other people might think or say.  Who knows, the same people quipping that it’s un-feminist or outdated might just be secretly scoping out the options, too. Leah DeCesare is the author of Forks, Knives, And Spoons (SparkPress, April 2017) and the nonfiction parenting series Naked Parenting, based on her work as a doula, early parenting educator, and mom of three. Her articles have been featured in The Huffington Post, International Doula and The Key. She writes, teaches and volunteers in Rhode Island where she lives with her family.