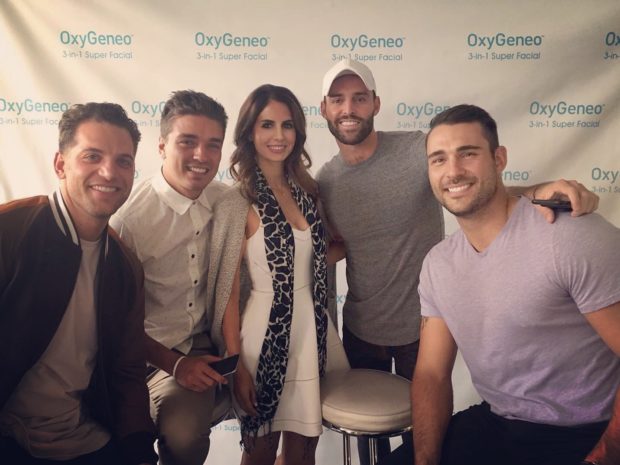 Eligible Magazine recently welcomed back Robby Hayes and a new batch of handsome bachelors freshly off the last season of Bachelor In Paradise. Robby, Dean Unglert, Adam Gottschalk and Ben Zorn were all in town to host our annual TIFF Bachelor Party. The event, which took place at the King St. hot spot Everleigh nightclub, would once again witness long lines of female (and male) fans, hoping to catch glimpse and even a photo with their favourite cast member.

Earlier that day, at the sponsored OxyGeneo Media Lounge, I was fortunate enough to sit down with these four charming guys and ask some questions that fans would likely be surprised to know. From my first impression, what I sensed were four very welcoming and gracious men who were not only enjoying their Toronto experience but even more intriguing were really enjoying each other’s company. No matter what drama or complications (ie. dating the same woman) may have gone down on Bachelor in Paradise the “bromance” between these four was strong. They seemed appreciative of the opportunity and dare I say it- quite humble. Our remarkably laid back but insightful interview (which even included a game of “F” Marry Kill) began something like this:

What was your take on RAVEN’s comment that she couldn’t date someone with quote “prettier hair than me, prettier skin than me and prettier abs than me”. Do you think your looks give woman the wrong impression?

ANSWER: You know what, it’s a comedy show so I learn to take it with a grain of salt. I feel like if they couldn’t find anything else to emphasize then so be it right? I’ll just take it.

What’s it like to come to an event with all these woman who are vying for your attention compared to even just a couple years ago.

ANSWER: It’s great. Canada definitely has the most loyal fans. This isn’t the only Canadian based event I’ve done. I’ve done events in Edmonton and Calgary but TIFF last year was one of my favourite things I’ve ever done. One of the best things that’s come from the shows is the events you get to go to. Everything from the American Country Music Awards in Vegas, the Emmys and all the way to the red carpet at TIFF. That’s my favourite part because you get to meet really neat people such as yourself (I told you they’re charming) and we get to go out and have fun as a group. So it’s been a blast and I love Toronto. It’s one of my top 3 favourite cities. I’ve been back 3 times since TIFF last year.

You mentioned in a relationship there are certain wants and needs that need to be fulfilled by both parties. From all your experiences, what have you found to be the most important quality from your partner in order to stay happy and connected?

ANSWER: For me I need a confident woman. I dated someone for awhile that my family wasn’t too fond of. She would come in, sit on my lap and not say anything. She was shy and never took me around her family. It was always my family. So I need someone who’s confident. Someone I can take to a business black tie event and she can go up to my boss and spark up a conversation. Not someone who’s just going to follow me around. Someone that can make it on her own. If I get pulled aside she can survive on her own in any episode. Confidence.

In episode 4 of bachelor in paradise you mentioned an energy that SARAH exuded that attracted you. What ultimately led you to feel you two were better off as friends? Was she too “available”.

ANSWER: Sarah was a little bit different than Raven in that she was completely open with her feelings. Raven was a lot more reserved and kind of had this mysteriousness to her. I think Sarah just put everything out on the line and I thought that was something special because I never had someone that was invested in me like that. It took me for a bit of a ride but I had to sit back and figure out OK this is how you feel about me but I need to know how I feel about you.

Being a girl and having the tendency to get jealous at times I’m wondering how your girlfriend handles you coming to these events where hundreds of women are swooning over you.

ANSWER: I feel that relationships are built off trust and knowing that obviously we go to events like this. We have been very open from the get go on our relationship, about how we feel about each other and how committed we are. At the end of the day you have to be able to trust someone to come here in the first place. I’d be lying to you if I said she doesn’t have some kind of jealousy towards me coming to an event like this because that’s what happens. I think it all just revolves around me as a man knowing that fine line between being friendly with somebody and stepping over that line. Honestly it’s a level communication in a relationship.

If your friend told you they wanted to go on the Bachelorette or Bachelor in Paradise what would you tell them?

ANSWER: I would tell anybody that if it’s something they really want to pursue then go for it. It definitely allows you to open up in a completely different way because everything is so condensed in a short amount of time. You have to be very vulnerable. I would also tell somebody to not be one person in interviews and be someone completely different when you get onscreen and in front of the cameras. Just be 100% yourself and have fun. I wish I had had some help from fellow alumni before I started the show. It’s a mental challenge. When you’re stuck in a house for days among days and you only get to see the bachelor or bachelorette every 3 to 4 days it starts to get to you.

Being a dog owner myself I could relate to how difficult it was being away from your pet. Do you think your heart was really in it during your time on the show?

ANSWER: My heart was 100% in it for the right reasons, yes. I think it came down to the fact that there was nobody else I had a connection with there and I didn’t want to hang out on the beach and waste any more time. So it was more about the people there or lack thereof. I didn’t make a connection with anybody so it was less about me needing to go home to him. I wanted to give it a real shot but as soon as I knew it was time for me to go I was out.

Describe 2 or 3 qualities you possess that you believe separates you from the other guys.

ANSWER: There are so many good guys that were on the show. I don’t know if any specific qualities separates me from them but I think one thing is I’m always true to myself no matter what environment I’m in. I’m always myself. I’m not going to be something I’m not. Also I’d say my persistence. On the show even though I didn’t get any one on one dates I was persistent in that I made sure I made my OWN one on one dates. I did the best with what I could. A lot of guys on the show would wait around for a date card but I essentially made my own dates happen. Of course they didn’t show that because it didn’t involve my dog! But I had some great date ideas.

In episode 6 you gave your rose to Danielle. There didn’t seem to be anything romantic between the two of you so what made you decide to give it to her over Alexis or Sarah.

ANSWER: At that point Danielle and I had actually been on two dates prior to the show so we had not built a relationship per say but had built some form of conversation and we were actually spending some time together. Of course they didn’t show any of that. There was a scene where me and her were making out in the ocean but of course they didn’t show any of that either because Zeus wasn’t involved. It didn’t really make any sense on TV why I had given my rose to Danielle. In hindsight had I seen everything that happened with Dean I would have given my rose to Sarah. I think there was chemistry with Sarah though I don’t know if it would have turned into anything romantic. Having known what was going on behind the scenes with Dean I would much rather have given my rose to Sarah. And it probably would have helped Dean out a lot.

What was the biggest lesson you learned from being on Bachelor in Paradise? Would you change anything if you could?

ANSWER: Biggest lesson that I learned is that just because you are being honest with people doesn’t necessarily make what you are doing right. I wouldn’t necessarily change anything because had I not acted as I was acting I wouldn’t have been able to have the hindsight and know that I need to change.

I can imagine fans get very invested in you guys and your stories that unfold on the show. What is the typical reaction of people when they meet first you?

ANSWER: Face to face interactions have always been very positive. I don’t think anyone has been very negative. I guess there was an incident last night where someone called me a f**k boy to my face and then wanted a picture 5 seconds later. It was the first time I ever refused taking a picture. You get the nasty DM every once in awhile too. But every reaction I get face to face has always been positive. None of us are bad guys. You make bad decisions but it doesn’t classify you as a bad person.

What do you want people to know that wasn’t portrayed on the show?

ANSWER: I will say that I don’t like the way mine and Danielle’s relationship was portrayed on camera. They made it seem much more physical than it really was. Of course there were a lot of emotions involved. We were able to bond over a lot of our troubled upbringing. This never aired because obviously it didn’t fit the narrative. They decided to focus on mine and Kristina’s emotional attachment more but Danielle and I had a connection that was deeper than what they showed on TV.