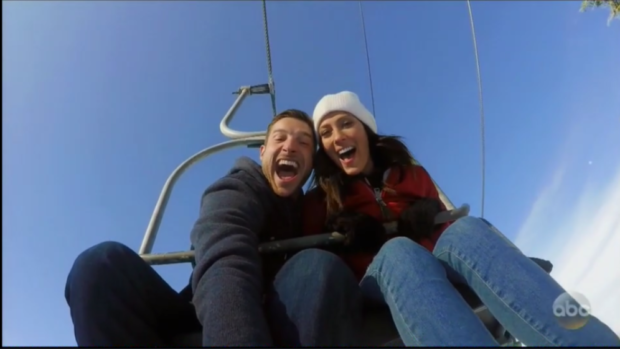 You guys, that episode was pure sensory overload. We had a change of location, a lumbersexual group date, and two Rose Ceremonies. Seriously, who has the emotional bandwidth to process so much action in a single episode? The answer is obviously not Becca. Poor girl had yet another breakdown, and we don’t blame her.

The episode started out on a light note. An early highlight was Becca gifting Jordan with some golden boxers, which he took to mean that she has been thinking about “his groin.” The model then dubbed himself “Captain Underpants,” which is a children’s book character, so the name doesn’t exactly exude sexiness to me. You’d think if you were coming up with your own nickname, it would be sultry and seductive, not a homage to a book you bought at the Scholastic Book Fair in Grade Three. But what do I know? I definitely lack what Jordan has dubbed “professionality.”

The most exciting part of the episode occurred when David returned from intensive care. Sure, I was happy the dude was healing, but I was mostly relieved that his feud with Jordan would live to see another day.  You guys, I kind of ship the two of them together, like, romantic-styles. Forget Becca! I’m hoping the tension between these two young lads is actually sexual tension. When Becca gave David a pre-ceremony rose as a consolation prize for breaking his body in last week’s Bunk Bed Incident, David was way more excited about how much his rose angered Jordan than he was about Becca being into him. And you guys, there is a very thin line between love and hate….Trust me, because that adage explains most of the romantic relationships I had until age 23.

Anyway, when it came time for the episode’s first Rose Ceremony, Becca sent home Mike and Ryan. It didn’t really bother me, because I had forgotten they were on the show. It’s so hard to keep track of all this man meat! Who can get to know so many muscular young men with similar haircuts? I’m only human! But don’t worry dear readers, I will continue campaigning for ABC to give all the dudes nametags, so we aren’t all “Who dat?” after three whole episodes.

Following The Rose Ceremony, we viewers received the exciting news that Becca and her contestants would be travelling to Park City Utah! This snowy destination mostly felt like an excuse for Becca to model some cute outerwear, but I was into it. Of course, her first date in Park City went to Garrett, winner of The First Impression Rose. It’s hard to believe it’s taken this long for Becca to get him alone. Obviously, there was a ton of producer interference on this one.

Anyway, Becca and Garrett’s date began with fancy hat shopping in downtown Park City, then transitioned to bobsledding. To my mind, these are two incongruous activities, but whatever, I do not produce the show; I recap it. Anyway, the bobsled portion featured Olympic silver medalists Valerie Fleming and Shuana Rohbock.  Apparently, they fell in love with working as bobsledding together, which is a super sweet story. Unfortunately, we found out from Garrett’s social media that he holds some pretty bigoted views, so I doubt he appreciated the glory of their love story.

After bobsledding, Becca and Garrett retired to a cozy dinner. At this point, Becca confessed she likes Garrett because he reminds her of her deceased father. Oh, poor Becca! She’s a feminist who went to the Women’s March. So, I’m guessing if she really knew Garrett’s pro-Trump views, she’d never want to besmirch her dad’s memory by comparing the two men.

Meanwhile, back at the hotel, Lincoln expounded upon his belief that the earth is flat. The other men were offended, because how does Lincoln explain boats? Wouldn’t they just fall off the planet at a certain point if it were flat? Lincoln responded with his observation that the earth looks flat from an airplane, ergo it must be flat, or maybe rectangular. Yes, this is the same Lincoln who was recently sentenced on sexual misconduct charges. Let’s hope he’s not representative of the moral character of most members of the Flat Earth Society, which yes, is a real thing. I swear I am not trolling you! Anyway, one thing’s for sure – the Bachelorette producers need to do a better job casting this damn show!

But back to the date! We received a bombshell, because it turns out the 29 year-old Garrett is divorced! Becca looked upset upon hearing the news, because he is obvi her favourite. The worst part is his marriage lasted a mere two months. Even Kim Kardashian and Chris Humphries made it longer than that! It looks like Garrett is a prototypical quitter. Stay away, Becca! You deserve so much better than marrying someone’s bigoted ex-husband.

After the one-on-one with Garrett, it was time for Becca’s lumbersexual-themed group date. While Canadians know this was derivative of a date on Season One of Bachelorette Canada, it was still fun to watch. I mean, the men wore plaid and chopped wood (no pun intended). Fortunately for us viewers, the gentlemen refrained from making comments about how they wished they could “split Becca open like they were splitting the wood.” I was positive we’d get at least one douchebag who’d think that line was clever. It’s not often these men exceed my expectations, so it was a welcome surprise.

After the Lumberjack Olympics were complete, the group went for dinner, and that’s when the drama happened. During some alone time with Jean, the guy who collects cologne, things got hella awkward. Jean, in an attempt to move his relationship forward, proclaimed that he was “falling in love” with Becca. Yeah, it was a thirsty, ill-advised move. It was the kind of thing someone would do in a Taylor Swift song.

Because Becca’s only known Jean for a few weeks, she was a bit freaked out by the premature declaration of love. In light of this, she opted to send Jean home. But as she did so, the man did an about-face, declaring he didn’t actually love Becca and had just wanted to tell her what he thought she wanted to hear. Obviously, the lying compounded the problem and Jean still got the boot. It was a cringe-worthy scene. I had horrible secondhand embarrassment while eating Skinny Pop on the couch. Anyway, the incident was triggering to poor Becca, who was reminded of how Ari lied about how much he loved her. Yes, we will never escape the specter of Ari. I have accepted that he is to this season of The Bachelorette what Laura Palmer was to Twin Peaks.

Next came a much-needed palate-cleanser! Becca got to go on a normal date with someone who isn’t a bigot or a Stage Five Clinger. She and Wills embarked on a super sexy ATV adventure, where they cuddled by a fire and generally speaking had a drama-free time where no one compared their beloved dead father to a secret racist. You guys, it was like the best Tinder date you’ve ever had.  The flirtatious vibe was more delicious than pizza (and I love pizza)! And really, what’s more fun than flirting? It’s literally the most fun you can have with your clothes on. I hope Wills lasts a lot longer! He’s one of my faves.

In other news, Jordan has expanded the list of people he’s feuding with to include Colton. But Colton is persona non grata to me now because his rationale for starting a fight with Jordan was a desire to save Becca from him. Colton believes he is entitled to bully Jordan because  he’s “one of the good guys.” That means he’s allowed to spar with other men he believes are there “for the wrong reasons.” Remember these pearls of wisdom, ladies: When a man tells you he’s “one of the good ones” he’s basically telling you he’s an asshole. I am firmly Team Jordan on this one! I mean, we all know Colton came for Tia anyway. I’d say that constitutes being there for “the wrong reasons.”

Moving on to the final Rose Ceremony, Becca gave Nick and Christon the boot.  We’re now down to twelve gentlemen, and next week the crew heads to Vegas! Oh, and It looks like Jordan may be going on the infamous two-on-one date. Praise be! That means even more Jordanisms to enjoy! Can’t wait for him to receive some extra screen time.