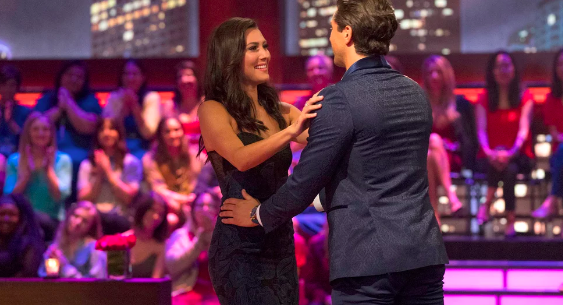 The Bachelorette: Everybody Loves Becca

So, the men told all on The Bachelorette last night! And, as it turns out, there wasn’t that much to tell…

If the reality TV genre were a zoo, reunion episodes would be a particularly tricky beast. Like a panda that’s super cute and cuddly, but still won’t mate. The Men Tell All is basically a panda, y’all, because when you assemble each of Becca’s boys together, the necessary parts are there but sparks don’t actually fly. There’s some friction, but it’s not a particularly compelling friction. It’s more of an annoyance, like when your thighs rub together on a really hot day. The Men Tell All is the dull cousin of the “After The Final Rose” installment. That’s the other reunion episode (Yes, for some reason that probably has to do with ABC wanting to milk as many profits as possible, there are two reunions on this franchise). The AFR happens after the proposal. At that point, Becca will finally be at liberty to “spill the tea,” as the young people say. As for now, we still don’t officially know who Becca chose as her betrothed (But let’s face it, it’s probably Garrett). And so we must tiptoe around on The Men Tell All, with Becca coyly explaining to her jilted lovers that she just didn’t feel as much of a connection with them as she did with some of the “others,” AKA For some incomprehensible reason, she loves Garrett’s bigoted ass. She just can’t say so until after the finale.

Of course, before Becca finally came out in the second hour of the episode, we were forced to sit through some sordid but lacklustrer guy drama. As is customary on the MTA episode, there was much bullying. This year, the primary target was Jordan. Now, it is incomprehensible to me how these men, in hindsight, still perceive male model Jordan as a villain. After all, Lincoln proved to be a CONVICTED SEX CRIMINAL. They had an ACTUAl villain in their midst, which should render Jordan innocuous. Jordan’s worst offense is thinking that “professionality” is a word. And yet, he is still their collective nemesis, all because he sported the golden boxers Becca bought expressly for him. Wow, masculinity really is fragile.

Colton attempted to elucidate the group’s irrational hatred for Jordan by explaining he found the model’s carefree attitude frustrating. The other dudes were stressed about making Becca like them, and there Jordan was, swanning about in his underwear and doing Zoolander impressions for her amusement. Jordan, however, correctly pointed out the locus of the  dudes’ hatred was probably their inability to loosen up. Jordan confidently declared that he, unlike the rest of Becca’s suitors, was able to “have fun.” And you know what? I think Jordan’s theory was spot on. His history of having fun with Becca doesn’t mean he was there for the proverbial wrong reasons. There is nothing morally inferior about a person who enjoys themselves. Plus, when she finally made her appearance, Becca took the opportunity to compliment model Jordan on his sense of humour and zest for life. See fellas, Jordan is a freaking delight! Why the hell didn’t you like him? While I do not fault Jordan for having fun while filming, I do fault him for virgin-shaming Colton on live TV.  That part was regrettable. I am putting on my serious lady cap for a second, because no one should ever be judged for their sexuality, as long as no one is being hurt by it. Their heated exchange went by quickly, but it went something like this:

Colton to Jordan: You’re a bitch.

Jordan to Colton: How can you call me a bitch when you’ve never been inside one?

Yes, it was a low blow, but to be fair, Colton and his gang of bros certainly started the brawl. Is it really Jordan’s fault if he’s just better at finishing things? I wish his retort had focused on something else, but I also understand Jordan’s feelings of anger. All he wanted to do was be this season’s bon vivant!

Colton eventually received his time in the limelight, too. He doubled down on his feelings for Becca, declaring a genuine love for her, and once again dismissing the possibility of having feelings for Tia. The former football player turned non-profit executive shed actual tears during his convo with host Chris Harrison. That’s how upset he was over the barrage of virgin-shaming he’s weathered. It was hard not to feel bad for him. I hope Colton loses his virginity some day in the absolute perfect way!

Other highlights from the episode included the return of fan favourite, Grocery Store Joe! For those of you who don’t know, Grocery Store Joe owns a grocery store in Chicago. Hence the nick name. And I have to say, he can bag my groceries any day! That man is fiiiiiiiine. He is not, however, a man of many words. Chris Harrison tried to grill the guy about how his life has changed after America fell in love with him (even though Becca sent him packing on the first night). However, Joe’s replies were basically a series of monosyllables. It would seem Joe is the strong, silent type. Perhaps we didn’t miss out on that much when he got eliminated so soon? We also saw the return of Wills, who is still dreamy. Because this episode is basically an exercise in contestant torture, Chris Harrison forced Wills to rewatch his breakup with Becca, complete with footage of him crying at the side of a Bahamian road. The footage was sad, but what wasn’t sad was Wills’ outfit. He was wearing a fabulous plaid suit. Man, that man can dress. I hope he gets a TON of stylish sponsored content endorsements.

Of course, the apex of the evening came when Becca arrived to face the men she’d rejected. Or at least it should have been the dramatic apex, but it turned into an innocuous love-in. Apparently, Becca is impossible to hate. Each and every one of her suitors still loves her and holds the Minnesotan in their highest esteem. At one point, Jason rushed the stage to hug the woman who rejected him pre-Fantasy Suite, then stated his desire to cultivate a friendship with his former flame. How very diplomatic!

Jason’s diplomacy is perhaps a giveaway that he is poised to be the next Bachelor. It’s hard to be mad at your ex when you’re about to meet 25 hotties who’ve been assembled for the purpose of falling in love with you. Jason definitely had the dignity and the gravitas befitting of the Bachelor-elect. Or maybe he simply has Big Dick Energy? Becca did use The Men Tell All as an opportunity to reiterate how Jason is, in fact, the world’s best kisser. But if that’s true, why the hell didn’t she take him to The Fantasy Suite? What kind of ridiculous self-deprivation is that? Treat yo self, Becca! It’s 2018, and women should be allowed to enjoy sex for its own sake! If this were The Bachelor and Jason were a pediatric nurse named Lauren C, there’s no way he would have gotten cut before The Fantasy Suite. The Bachelorette deserves her fair share of sexy times, too. It’s time to screw society’s double standards, and let women get screwed as much as they like. Sadly, The “Men Tell All” episode ended, as is customary, with a collection of bloopers. This begs the question, why are we as a society so obsessed with bloopers? They’re just a collection of horribly embarrassing moments. When I see footage of Jason slipping on his parents’ icy porch, I just feel bad for him. Who are these staunch fans of schadenfreude who are so mad for awkward moments? I think it’s time we put a moratorium on blooper reels. They truly represent the worst of our society.

Anyway, until next week, dear readers! Soon, we will know who has captured Becca’s heart. Is it sweet, sensitive Blake, or Garrett the Bigot? Gah! Is anyone else worried this won’t end well?