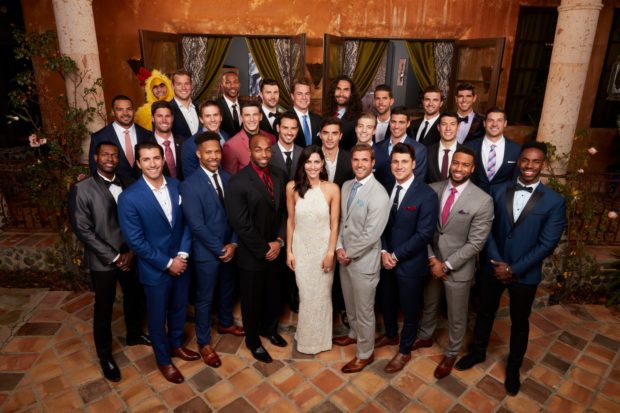 The Bachelorette Finale: What Was Becca Thinking?

The Bachelorette is done, and so is the proverbial damage. Becca has chosen Garrett, and the rest of us had to watch Blake, America’s bae, get his heart broken in an ableist way. Basically, The Bachelorette finale was one big facepalm.

The finale was a three-hour trainwreck that kicked off in the Maldives. Sadly, that gorgeous setting was the backdrop for a lot of disappointing decisions from Becca. Becca began the episode by introducing the remaining two suitors to her family. Garrett went first, and the guy could not stop weeping. He wept about his feelings for Becca, the death of his grandpa, etc, etc.  And that display of emotion would have been touching, except for the fact that we know from his social media how the dude has no sympathy for anyone else’s problems.

Becca’s uncle emerged as the hero of the episode. He took one for the team when he grilled Garrett about his failed marriage. Apparently, the whole thing broke up two months after their nuptials, due to an altercation Garrett’s ex-wife had with his family. An altercation Garrett suggested was ALL HER FAULT. Now, I’m not sure I believe him. We haven’t heard from this woman AT ALL, but what we do know if Garrett does not inspire confidence. He’s a bigot who thinks it’s funny when memes refer to survivors of school shootings as paid actors. That track record doesn’t inspire trust. My kingdom to hear his ex’s side of the story! No seriously, if she’s reading this, I am prepared to cash in a savings bond as compensation for her truth! It’s driving me to distraction…

RELATED: The Bachelorette: Everybody Loves Becca Later, after Blake met Becca’s fam, it became clear her relatives preferred him to Garrett the Bigot. Becca’s family encouraged her to choose Blake, because he was more likely to challenge and support her. And because he cares about the “same issues” as she does. i.e. He is not a horrible racist alt-right person.

Unfortunately for Blake, that family endorsement was not enough to secure his victory. Becca, it would seem, is one of those women who gravitates towards flawed men she can “fix.” That’s probably why she was into Arie, the douchebag who left her for another woman mere weeks into their engagement. The thing is, you can’t actually “fix” a man. Some men are d-cks. And while most women find ourselves inexplicably crushing on a d-ck at some point (I can’t be the only one who once considered Spencer Pratt cute), it’s morally wrong to tether yourself to a jerk for life.

There are those Garrett apologists on Twitter, who argue we should all want Becca to choose the man she loves, regardless of his beliefs. But why would she, a feminist who attended the Women’s March, allow herself to fall in love with someone so repugnant? It’s 2018, and the personal is more political than ever. Choosing a person like Garrett on national television normalizes his views. Sometimes we have to stand by our convictions.

When Becca dumped poor Blake, it was so upsetting Chris Harrison literally issued a trigger warning beforehand. He told America it was the most “upsetting” breakup ever featured on the franchise. And on many levels, he was right. Becca, who later claimed to have broken up with Blake on account of his anxiety issues, appeared to have no concerns about his anxiety when she was in the process of rejecting him. Rather than ending things swiftly, Becca allowed Blake to recite his WHOLE PROPOSAL SPEECH. The Bachelorette smiled serenely as the school shooting survivor professed his love. Only after his touching soliloquy did Becca finally own her choice, informing Blake he wouldn’t be sliding a Neil Lane ring on her finger. As Becca walked Blake out, things got even worse. Blake wondered aloud how he could have been so “wrong” about their connection. In response, Becca basically gaslit him, saying she had been “right there with him the whole time.” She asserted he had not imagined the depth of their connection at all. But um, obviously his hunch they would end up together was incorrect. Obviously he did read things wrongly, and Becca should have allowed Blake to accept and understand that. Clearly, if she was choosing Garrett, she felt more for him. Why the hell did she have to get in the way of Blake processing his emotions?

When newly engaged Becca arrived on Chris Harrison’s couch at the AFR, Blake was still his sweet self. He insisted there were “no hard feelings” between them. Later, he reassured America that he won’t give up on finding love. Methinks that gorgeous man won’t have to look far though. Everyone in North America is in love with his gentle soul. Well, everyone besides Becca, who informed Blake she worried his tendency to “freak out” about things would have ruined their life together. Yes, Becca didn’t choose Blake, because ableism. Apparently she’d rather choose a racist than a school shooting survivor who suffers from anxiety issues, a mental health problem that afflicts countless Americans. Last time I checked, having anxiety issues wasn’t a character flaw – or a choice – but bigotry was. I’m not a doctor, but I’m pretty sure the DSM would agree with me…

Not only does Garrett espouse objectionable views on social media, but the finale cemented him as a dweeb. The guy is so uncreative he kept telling Becca he couldn’t wait “to change diapers” with her. Oh, and apparently she doesn’t give him butterflies, she “gives him eagles.” What does that EVEN MEAN?

While we never received a a straight answer about how an alleged sexual predator like Lincoln ended up on a reality dating show, the AFR attempted to address (however feebly) the other elephant in the room. In an attempt to rehab his image, Garrett delivered a rehearsed and robotic apology for his social media history. The resident of Reno insisted he “didn’t mean to hurt anybody.” Except, why would someone endorse offensive memes on social media if they didn’t want others to see? And surely, an intelligent person would realize that some of those people would be offended? If you don’t want to hurt anyone, avoid associating yourself with hurtful statements on the God Damn Internet! In kindergarten, we were all taught, “If you can’t say something nice, don’t say anything at all.” Obviously, most of us aren’t perfect. Sometimes we all say insensitive and regrettable things. However, Garrett  knew no decency. He liked the most revolting memes mocking immigrant children, for crying out loud! And he applauded people taking shots at feminists, when inconveniently for him, his fiance is one. Yes, Becca went to the Women’s March and everything. Which begs the question, how can she live with her choice of husband? To be fair, Becca didn’t know Garrett’s opinions were so problematic when she chose him. She had no access to his social media while filming. However, now that she does now, she is standing by her man, and we can judge her for that. Garrett delivered a vague and forced apology that contained no actual analysis about WHY his behaviour on social media was so offensive. He didn’t apologize for his lack of awareness about his own privilege, how he used his status as a straight white man with money to mock already marginalized groups, how he helped further discrimination for his own cheap amusement. Becca claimed she rejected Blake because she believed his tendency for anxiety would complicate their hypothetical family. But apparently she’s okay with exposing her future kids to someone who doesn’t get why the abuse of immigrant children is wrong? Last night, Becca told Chris Harrison she was glad she’d gotten to know the “real Garrett” before seeing his social media. For her, his “soul” and his “heart” are somehow separate from his public opinions. But it’s hard to reconcile the idea that social media doesn’t matter with an age where the freaking president uses Twitter as a reckless tool of oppression.

Becca defended her beau. She lamented how people have said “terrible things” about Garrett on social media over the past couple of months. However, it’s rich to hear the reality star sympathize with her fiance, when Garrett himself  felt so comfortable espousing terrible sentiments about vulnerable people. He’s a well-off, cisgender, straight white guy. He’ll be fine. I’m not sure we need to cry a river for Garrett when he was perfectly fine with jokes at the expense of actually oppressed people.

They say you can’t help who you fall in love with. But you CAN control whom you marry. I understand it would have been awkward for Becca to go through two broken engagements in one year. But committing oneself to a lifetime with a bigot just to save face is not worth it. Marriage can be a beautiful institution. I understand why Becca wants to enter it. I get her desire for a teammate, a partner she can rely on. Having said that, she set a horrible example for young women everywhere last night. This charming, professionally successful 28 year-old woman normalized settling. She set an example to women everywhere to stand by your man, even if he stands for everything you’re against. I wanted more for Becca, and I also wanted more from her. I really hope she sees the light before heading down the aisle. Sometimes it’s better to hold out for something better…

Well, that’s it for this disappointing season of The Bachelorette. Until January, dear readers! When hopefully our recaps will return with Jason as the titular Bachelor. Keep your fingers crossed!

RELATED: Pull The Weeds From Your Loving Relationship