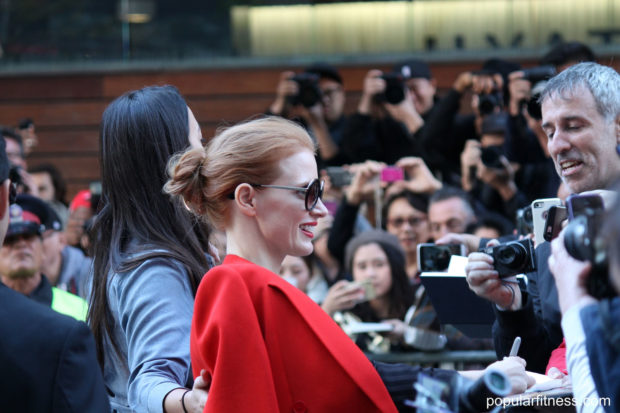 Is It Tacky To Hook Up With Celebs At TIFF?

The 43rd Toronto International Festival will soon be here. TIFF is the largest public film festival in the world – something Torontonians routinely tell anyone who’ll listen. This year’s festival is scheduled for September 6th to the 16th, and, as usual, it will be chalk full of the sorts of celebrities married people put on their “Freebie Five Lists” (You know, like Ross on Friends).

Boasting a list of premieres so impressive it would make The Sundance Film Festival sob with insecurity, TIFF attracts a bevy of celebrities there to promote their Oscar bait-y movies. This year’s festival will boast such luminaries as Claire Foy (The Queen herself!), Issa Rae, Bradley Cooper, Lady GaGa, Elizabeth Debicki, Penelope Cruz and Javier Bardem. Oh, and who could forget everyone’s imaginary boyfriend, Ryan Gosling?

With so many charismatic, sexy people descending on our city, it’s easy to understand how people’s inner starf-ckers emerge. As half of Hollywood alights upon the 6ix for TIFF, a veritable starf-cking fever spreads like mono at a high school make out party. In case you’re wondering, the term “star-cker” was popularized by the Nine Inch Nails in the year 2000 with a song called – you guessed it – “Starf-ckers.” Originally written to deride Courtney Love for her relationship with Kurt Cobain, the epithet describes people who make it their mission to hook up with famous folks. Starf-ckers are vilified as smutty fame succubi, who use their sexuality to gain entry into the world of celebrity.

During TIFF, one can observe the starf-cker in their natural habitat. They camp out at the lobby bar of the Ritz-Carlton, hoping to catch Ryan Gosling’s eye; they make reservations at fancy restaurants no one can afford in the hopes of getting seated next to Colin Farrell. They’ll end the night sneaking into industry parties at Soho House, clad in Herve Leger from Rent The Runway.

Those who succeed in bedding someone like (Insert Your Favourite Celebrity Chris or Kate here) usually polish these anecdotes like a trophy. They dine out on stories of their sexcapades for months, or even years. However, non-starf-cking folks love to look down on guys and gals who brag about having hooked up with Ashton Kutcher. Society tolerates the raw ambition that compels film students to wait by The Red Carpet in hopes of slipping Aaron Sorkin their screenplay; we’ll gladly hit “like” when a friend uploads a selfie they snapped with Emma Stone. But the minute someone sleeps with a celebrity, the moral majority is scandalized, morphing into the puritanical townspeople from The Crucible. But come on, it’s time for that sort of hypocrisy to be done: let’s admit that there’s an inner starf-cker in everyone.

Two types of people exist on our planet; those who admit to wanting to sleep with celebrities, and liars. In order to achieve movie stardom, someone must embody one or more of the following traits; they must be terrifically talented, inhumanly hot, or categorically charismatic. Such superlatives make celebs irresistibly sexy. If they weren’t, no one would purchase gossip magazines at the airport, or invest twenty bucks in Anna Kendrick’s autobiography. We spend that cash to feel close to the stars, to figuratively touch society’s on-screen royalty. But you know what’s better than figuratively touching a screen siren? Actually touching them (with their enthusiastic consent, of course!).

Still judging starf-ckers as pathetic fame vampires? Allow me to put it this way: If you were vibing with a non-famous Idris Elba lookalike, there’s no chance you’d refuse his advances. Can you honestly say your reaction would be different if you ran into the real Idris? Of course not! He’s on everybody’s Five List.

In the words of author Laurel K. Hamilton, “We hate in others what we dislike in ourselves.” Society judges starf-ckers because these brave men and women go after the brass ring everyone else covets in secret. While others fantasize about making out with Halle Barry or Tom Hiddleston, starf-ckers brazenly make it happen. That sort of chutzpah should be admired…