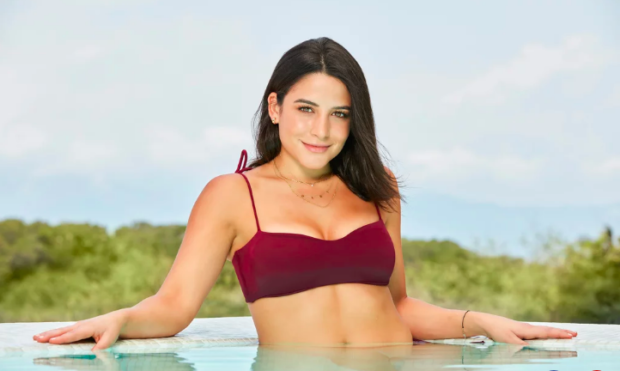 Bachelor In Paradise: Is Bibiana An Undercover Producer?

Bibiana Julian is a fan favourite in Bachelor Nation. She first lit up our screens in January, competing on Arie’s season. Ms. Julian later – hilariously – told the Almost Famous podcast she felt “victimized” by ABC’s choice of Bachelor that season, citing the former race care driver’s “cold” demeanor. No arguments there!

Bibi, as fans and friends call her, made a big impression on her debut Bachelor season by taking on Chrystal, her season’s certified villain. The former Miami Dolphins cheerleader was such a hit, she was subsequently cast on Bachelor Winter Games, and now she’s back for Paradise, too. But this season, something appears a little…off. Dear Bibi feels more like a puppet master than the puppet, which begs the question, has Bibi been hired as an undercover producer to stir things up on Paradise?

To support this theory, we compiled some evidence that Bibi just might be a stealth BIP producer.

Bibiana made such a big impression on Arie’s season. She was the one who basically told Chrystal, “Share Be fair,” when the  personal trainer hoarded alone time with Arie. Bibi is never awkward, nor have we ever seen this loquacious young woman at a loss for words. However, her entrance to BIP this season was decidedly un-Bibi, and a bit cringeworthy. She announced to Chris Harrison that the road to the Paradise beach house had been so “bumpy,” it was “the most action my uterus has had for a while.”  Now, I’m assuming that was meant as a raunchy double entendre, but how much action does one’s uterus receive during the average sexual encounter? Not only did the joke not make sense, but Bibi’s delivery was uncharacteristically lackluster. Her heart wasn’t in it. Which begs the question, was she too distracted by her new job as a secret producer to be her normally cool and charming self? Hey, “New Job Jitters” get the best of us all!

2. Bibiana Isn’t Vibing With Anybody

Bibi isn’t a wallflower. She’s a sexually empowered modern woman, and she’s usually more in the mix than this. On Bachelor Winter Games, Bibiana hooked up with dreamy Kiwi contestant Jordan Mauger. She also took a run at Canadian Kevin Wendt before he and Ashley became an item. But on this season of Paradise, Bibi’s been comparatively chaste. Could that be because, as an undercover producer, Bibi’s more concerned with orchestrating other people’s hookups than her own? Could she even be reluctant to get involved with the cast for professional reasons? Remember, past producers have been fired from the show for having dalliances with the talent! Getting fired isn’t fun.

3. Bibiana Gave Her Rose To Colton

Before he showed up on paradise, Tia basically called dibs on Colton. She and the former football player had a dalliance one weekend before he ended up as a suitor on The Bachelorette, vying for Becca Kufrin’s heart. While Tia’s feelings only intensified during that separation, Colton fell hard for Becca. And Colton took it hard when the titular Bachelorette dumped him after hometowns, primarily because Tia had revealed enduring feelings for the athlete. Tia seemed to think their BIP reunion was a done deal, but when he materialized, Colton was still nursing a broken heart. Admittedly, that didn’t stop him from kissing Tia. This created some pretty mixed messages, when confused Colton did an about-face, declaring he wasn’t ready to commit to Tia. Instead, he wanted to explore connections with other Paradise people.

His wishy-washy behaviour made Colton something of a villain, and resulted in Tia giving Chris her rose. For a moment, it looked certain Colton would get sent home to Colorado. But, with only one rose left, Bibi unexpectedly bestowed hers on Colton! Why? Well, she claimed to feel he “deserved” to the chance to explore more on the BIP beach. This was a little suspicious, because the two had no perceivable connection. They hadn’t even had a meaningful conversation. Bibi was clearly not into Colton, and yet she spared him. Why? Methinks she’s a savvy secret producer who knew drawing out the drama between Colton and Tia would be good for ratings. Why have a one-week Love Triangle when it can last all freaking season? This is the best proof possible that Bibi has transitioned from contestant to undercover producer. We dare you to refute us now!