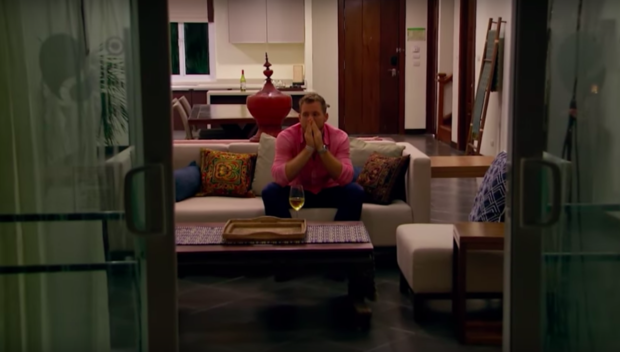 The Bachelor Recap: Feuds, first kisses, and is Kirpa okay?

Hello Bachelor Nation! When seeking the words to describe this week’s episode, all I can think of is Chris Harrison’s voice shouting, “It’s The.MOST.DRAMATIC.BACHELOR.EPISODE.EVER.” And even though he Harrison didn’t use those word with regards for this installment, I think that was a missed opportunity! For once, that hyperbolic claim wouldn’t seem so hyperbolic. I think the scientific term for what happened this week is: SH-T went down!

The episode began with Heather receiving a one-on-one date. If you recall, Heather’s profession has been listed as “Never Been Kissed” since the premiere. Well, Heather has officially switched careers. Presently, her chyron reads “has been kissed.” That’s right, viewers! Colton did the honours! Heather had her long-awaited first kiss on a beach in Thailand, under the stars, as she and Colton watched a fireworks display. This elaborate setup begs question, is Heather going to be messed up for life? When your first kiss is basically a scene out of a Nicolas Sparks novel, the producers have set you up for a whole lot of disappointment in the future. I pity Heather’s future suitors, because they won’t have access to dates planned by The Bachelor’s production team. Heather, who has now BEEN kissed…

While Heather’s date was a major life event for her, it was what happened AFTER said date that really caused a stir. Following a weepy day spent explaining to producers that she needed more “validation” from Colton, Elyse left the house in search of him. To do so, she wore what looked like the dress a bride at a destination wedding in Cabo would wear.

Ironically, it turns out Elyse put on her bride costume to dump Colton. This strikes me as cruel. Because when you go to the guy you’re dating to say you don’t see yourself being able to get engaged in a few weeks, as the show’s premise demands, you ought not taunt him with wedding cosplay. For his part, Colton was devastated. He wept so much his eyes were puffy when he recorded his vlog the next day. Apparently, it is Colton’s greatest fear that he might actually end up alone at the end of the process. Poor guy. He looked so sad I wanted to reach through my TV and give him a hug (and not just because I’m sure his biceps are impressive).

Peace, Elyse! We’ll miss you. We wish you well. Just try to avoid wearing a long white gown to your next breakup. I feel like that’s even more of a faux pas than wearing white to a friend’s wedding.

The next day, there was a group date. This week, the group outing had a survivalist theme. Colton ventured out to a Thai jungle with nine contestants. The ladies were divided into teams of three and told to forage for protein, I.E. bugs. Well, Evil Genius Demi was having none of it. She and her team of Hannah B. and Hannah G. hightailed it back to the hotel to procure burgers and champagne before retuning to Colton’s side. While their obvious cheating disqualified Demi’s team from the competition, they did win in Colton’s heart. He was a big fan of the cheeseburgers they brought back. Colton is not a nature boy.

While the survivalist challenge was a cute respite from the episode’s emotional intensity, the post-date cocktail party returned the episode to dramatic form. Consultant Onyeka, whom I had quite liked until now, decided to stir the pot. With a little prodding from Demi (More proof that girl’s an evil genius), Onyeka pulled Colton aside to pass along a rumour. She claimed that, before Elyse’s departure, she revealed Nicole was only on the show to find a way to “out of Miami.”  This comment was immediately suspicious, as Miami is a lovely place with great weather, and I doubt anyone would be so desperate to leave that they’d sign up for The Bachelor as an escape plan. While he has lived elsewhere, Colton is from Washington, Illinois. No offense to Washington, but is it really a more exciting place to live than Miami? A google search shows it has a population of approximately 16,000 people. I don’t think Colton is anyone’s escape from a banal life. Now, we all know you should never confront the lead with gossip about the other girls. That plan consistently backfires, but for some reason Onyeka still decided to be the proverbial messenger who gets shot. And the worst part is, the rumour turned out to be false. While Onyeka was passing on secondhand info, we learned Tayshia was actually there for the convo in question. Tayshia, benevolent human that she is, immediately leapt to Nicole’s defense. Apparently, Nicole never suggested she was on the show for anything other than THE RIGHT REASONS. What a twist! Poor Nicole’s reputation was besmirched with spurious intel!

The next day, Colton accompanied his clear favourite, Cassie, on a very sexy date. It’s obvious she’s his preferred contestant by the way he grabs her backside at each opportunity. Their date to a “private island” (which was the grandiose way they described a small sandbar in the middle of the ocean) certainly delivered. Those two have more chemistry than a high school science class! They made out everywhere, including Colton’s bed!!!!

Of course, because this is ABC’s The Bachelor, it was incumbent upon Cassie to use her date as an opportunity to open up about her Secret Pain. However, after hers was revealed, I had nothing but sympathy for the 23 year-old beauty. She confessed to Colton that she is not a virgin, which, in her community, is something for which she would be judged. Of course, Colton reassured Cassie he would never judge her sexual history; however, the scene was still gut-wrenching. I did some internet sleuthing, which revealed Cassie attended a Christian college, and it seems sex before marriage is taboo in her community. The actual FEAR that came over the young woman’s face made my heart bleed for her. She was so terrified of the slutshaming that awaited her upon returning home! I truly wish Cassie the best…I also hope we will one day live in a world where women are no longer judged for their sex lives. Colton and Cassie, getting cozy…

In a week with many climaxes (no pun intended), the most dramatic moment proved to be The Rose Ceremony, or rather, the lack thereof.  Nicole used the pre-ceremony cocktail soiree as an opportunity to set the record straight with Colton. Not only did Nicole insist she’s on the show for love, but she also accused Onyeka of bullying her, and spreading a vicious rumour that Nicole is “emotionally unstable.”

Colton investigated Nicole’s claims immediately. It’s obvious he enjoys Onyeka’s company. She’s a fun, funny girl, so it’s understandable he was taken aback by Nicole’s claims. Onyeka denied referring to Nicole as “emotionally unstable.” She insisted she would never even use that word! And it turns out, that’s because she prefers to call people “psycho.” That’s the label she used to describe Nicole in the ITM the producers cut to following her denial. It was some pretty damning editing.

Overwhelmed, Colton fled the cocktail party. That’s right, he dipped on The Rose Ceremony! The episode ended with the most frustrating words in the English language, “To be continued…” Ugh! How am I supposed to move on from this week’s installment without a proper resolution?

Of course, the biggest mystery of the episode is not whether Colton will rally and return to the house. Rather, the most burning of all questions is what the f-ck happened to Kirpa’s chin? The poor woman is walking around with a massive band-aid on her face, and it was never addressed. It was never even alluded to. Everyone was walking around acting normal, like there was not a MASSIVE BANDAGE ON A CONTESTANT’S CHIN. What happened to her? Did she get into an off-screen brawl? Did she fall? Did she have a self-waxing accident (Hey, we’ve all been there!). Were there stitches involved? You guys, Is Kirpa okay???? If you know what happened to Kirpa, please DM me. If I had money, I’d provide a cash reward for answers, but I don’t, so please share any info you have, anyway! I will repay you with everlasting gratitude… Until next week, Bachelor Nation!

RELATED: The Ten Most Anticipated Books of 2019